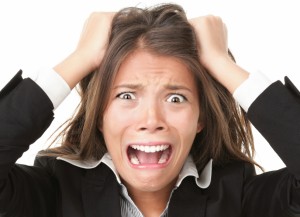 It’s Friday! For most of us that means no having to deal with annoying co-workers or snooty bosses for two whole days! No waking up before the sunrise and no chauffeuring the kids around. The stress most have to endure during the week can really take a toll on you if you don’t release or cope with it properly. It’s not just work related either. A person’s home life can be just as stressful as the work place and once a person reaches their boiling point, there’s no telling how or where they’ll react.

In the video clip above, an appearently frustrated mother in an Apple store is only six seconds long but the audience can definitely tell that the mom is highly upset and frustrated.  Yahoo! News reported that freak out video was captured by actress Porscha Coleman, who was an Apple store bystander at the time and the video has since gone viral. I choose to believe that her outburst was misdirected at the poor Apple store employee, calmly standing in front of her. Maybe little Timmy just had a temper tantrum before she walked into the store and her having to wait in line or not being able to get assistance was the straw that broke the camel’s back.

We’ve all been there. That place when we’ve taken all we can take and even the smallest inconvenience sends us into frenzy. So how do you deal with keeping your stress levels low to prevent you from freaking out in a Apple store like this woman?

According to US News, “We can keep ourselves stressed 24/7, and unfortunately stress can cause all sorts of problems, including, for example, injuring the very part of the brain that turns off the stress response”, says Steven Southwick, professor of psychiatry, post-traumatic stress disorder and resilience at the Yale MedicalSchool and the YaleChildStudyCenter.

For an outlet to your regularly induced stress like running late for work laundry piling up, US News suggests “expressing your feelings”, “finding social support”, “finding a way to relax”, “facing your fears” and “finding a role model” as all effective ways of helping you cope with stress.

Remember, it’s okay to be stressed about certain things but don’t let the stress consume you. Try not to stress the small stuff. Doctor’s orders!

Are you guilty of a Friday Freakout? Has something like this ever happened to you?