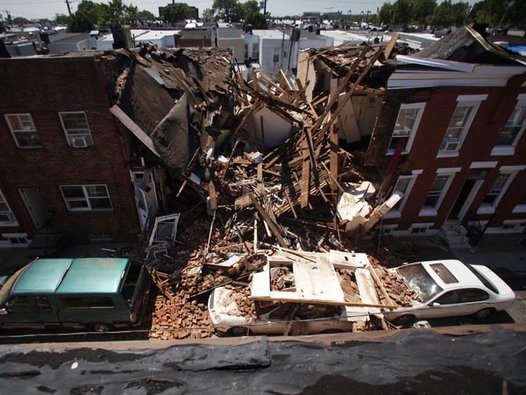 Usually Mondays are the most dreaded day of the week, but this Monday in the Philly state started out with a boom, literally. A row house in South Philadelphia, on Daly Street, exploded this morning around 11:00AM. Thankfully no deaths have been reported.

According to NBC10 Philadelphia, a row home came crashing down to the ground after an explosion in the home’s basement demolished the house causing eight people to be admitted to the hospital. NBC10 reported that a contractor was working on a water heater in the basement of the now demolished home. He was severely injured in the explosion, suffering from burns to his shoulder and arm.

NBC10 also reported that authorities confirmed the explosion was caused by a gas leak and that the contractor was out working on the water heater because it had several issues reported on it  in the past such as leaking gas.

As reported by NBC 10 Philadelphia:

During the three months of work, L&I inspectors came through 14 times to check the work and found no violations. Those permits were “finaled” on Friday. That means the work was completed, inspected and approved. The outstanding permit is for electrical work, which includes rewiring and installation of new outlets.

Luckily, no one including the contractor has died but NBC10 reported that the other seven people injured include “four other adults, a 15-year-old and two infants” with minor injuries.

Philadelphia authorities are investigating the cause of the gas leak.