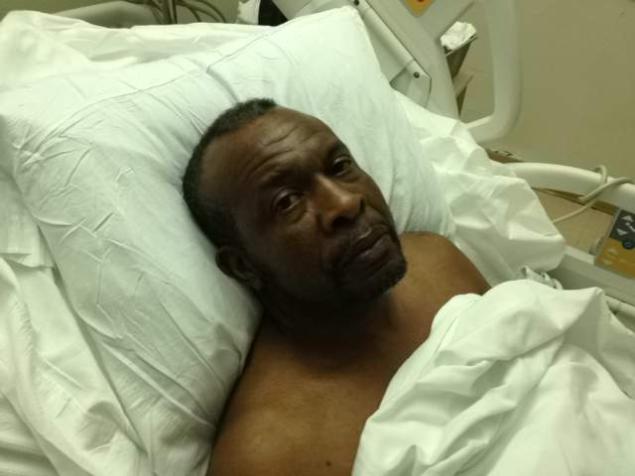 What do Trayvon Martin, Jordan Davis and now Roy Middleton, all have in common? All were/are unarmed, Black males who were shot in the state of Florida presumably under the state’s “Stand Your Ground” laws. Fortunately, this time it didn’t mean death in Roy Middleton’s case.

According to the Daily News, Middleton was fired upon over the weekend in his own driveway by two Florida cops after a neighbor reported him as a robber while he was searching for something in his car.  Middleton’s elderly mother, Ceola Walker, was also present at his home during the time of the shooting.

Daily News reported that one of  the officers who shot Middleton claimed he saw Middleton make a  “lunging motion” and that he had a “metallic  object” in his hand which therefore triggered him and his partner to fear for their lives and start opening fire on the victim. If this is true, Middleton was shot and had has leg shattered for a flashlight attached to his keychain (a keychain that was probably attached to the car keys he used to unlock his car in his driveway).

DN also reported that the  incident is being investigated and that the two officers have been suspended with pay.

First off, those officers should have been FIRED, point, blank period. DN even mentioned that Middleton said the officers could have run his plates when they arrived and then they would have known he was not stealing a car or in the wrong. VERY TRUE. Instead it almost sounds like these cops already had a pre-meditated notion that the Black man in the drive way was up to no good. Second, this seems to be happening a little too frequently in the Sunshine state. I’m not sure if the White people are more on edge since the Zimmerman verdict because Blacks are still upset or are the Black people starting to do more to provoke or at least look like their provoking trouble in the state?

What do my readers think?