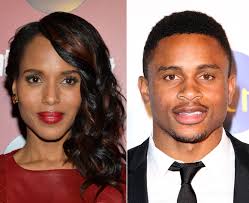 Kerry Washington once said that the goal of the hit ABC show Scandal is to “shock”. Well, it seems that Washington has taken a lesson from the Olivia Pope playbook. In a shockingly private ceremony, Washington married boyfriend Nnamdi Asomugha in Idaho, according to the Huffington Post.

Washington has gained popularity for her roles in movies such as “Save the Last Dance”, “Ray” and “Django Unchained”. Her biggest claim to fame is as ‘fixer’ on the drama, Scandal; which was the first in 30 years to have an African American woman as the lead. Washington also became the first African American woman to grace the cover of Vanity Fair magazine since 2005.

Asomugha was drafted by the Oakland Raiders in 2003, but signed with the 49ers in April.  Even with such high profile careers, the couple has successfully kept their relationship a secret, but according to the Huffington Post, neither has confirmed the marriage reports. E online has obtained a copy of the alleged marriage certificate. 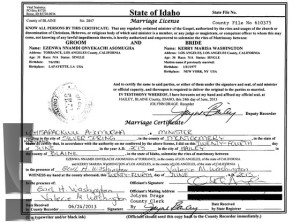 With Washington’s parents as witnesses and Asomugha’s sister officiating, the two have reportedly jumped the broom on June 24, 2013. I think it’s important for celebrities to maintain a life outside of the spotlight and it seems like these two are doing exactly that. We haven’t heard much about the relationship, engagement and we still haven’t heard from Washington nor Asomugha about the alleged marriage!