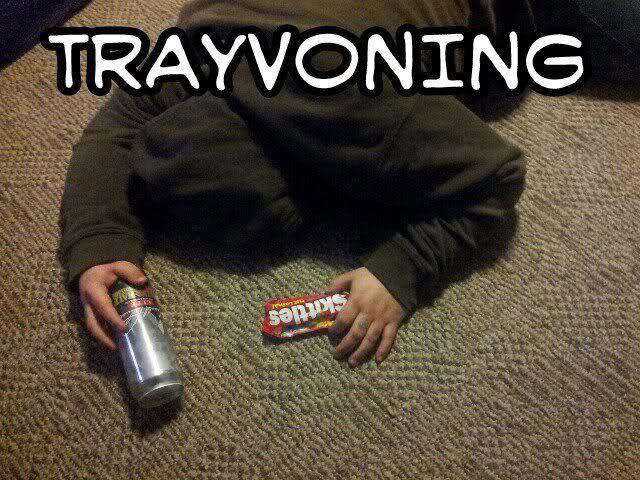 Trayvoning reverse racism! No one predicted that the killing of an unarmed black teenager in Florida would spawn an Internet meme devoted to mocking him. Probably because we like to think we’ve evolved past this. Then a bunch of white kids start multiple #Trayvoning Facebook groups (since removed). This is as awful as it sounds. It’s like Tebowing, but with white kids posing as a gunshot victim, wearing a hoodie and holding Skittles and an iced tea, which is what Trayvon Martin had on him when George Zimmerman shot him to death in February.

Hurr durr, says the Internet, it’s just a joke! Mocking this dead kid is funny and totally removed from its racial context! Wait, no it’s not. Because when provoked, the Facebook group members started spewing their own justifications: They’re combating “racism against whites.” “White people are becoming more and more oppressed.” Reverse racism is a very serious problem, you see, that needs to be mitigated by mocking people of color shot and killed by non-minorities. So it’s a joke that’s not a joke that’s really political commentary on how hard it is to be white. Oh, OK, I get it now.

1619 First Africans indentured servants for a certain amount of time, until 1865 when Slavery was abolished in the USA. Years of segregation no other race could nearly be as oppressed as African-Americans what gives these young white children the right to think that they should feel oppressed because they can’t use a word that their ancestors said for years to bash black people. Is it right for blacks as a culture o say the word I’m not going to be the one to debate that but is it right for whites to say it care free in the 21st century that will be a NO now and a no forever!

Check out my other posts about The Zimmerman Trial here at www.askdro.com