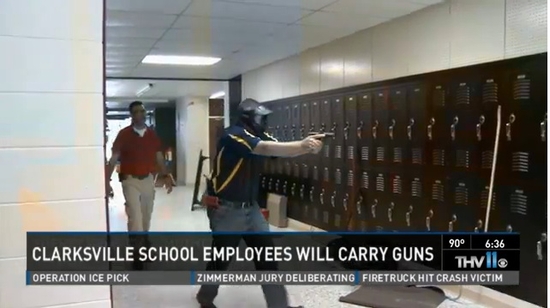 A school district in Arkansas is responding to last year’s tragic school shooting in Connecticut by arming more than 20 teachers and other employees. School District Buys Guns For Teachers And Staff! The Associated Press reported on Tuesday that Clarksville School District was providing each participant with $1,100 to purchase a firearm and holster. In addition, the district planned to spend $50,000 for ammunition and training from the Nighthawk Custom Training Academy. During training exercises, participants fire “air soft” pellet guns at actual students wearing protective gear. “There’s pressure on you, because you’re shooting real bullets if this actually happened,” Clarksville High School Assistant Principal told the AP. “I was nervous to start, but once it started and I was going through what they had taught us, it just took over.” Not everyone in the district, however, thinks the plan is a good idea. Arkansas Education Association President Donna Morey called the idea “awful.” “We just think educators should be in the business of educating students, not carrying a weapon,” she said. And Sherry Wommack is taking her son out of the Clarksville School District for his eighth grade year because she believes teachers should not be making life-or-death decisions. “I think police officers are trained to make those decisions, not teachers,” Womack explained.

I understand the school districts concern and how they want to keep their students protected. However I do not agree with authorizing teachers, janitors, and staff to handle jobs that they did not go to school for or take official training therefore doesn’t make them qualified. My thing is if the school district is so concerned why not just hire security and or police officers for the school. Most high schools have at least two police officers serving as on duty security for schools. And I think they should have at least one or two in elementary and middle schools. What do you think?