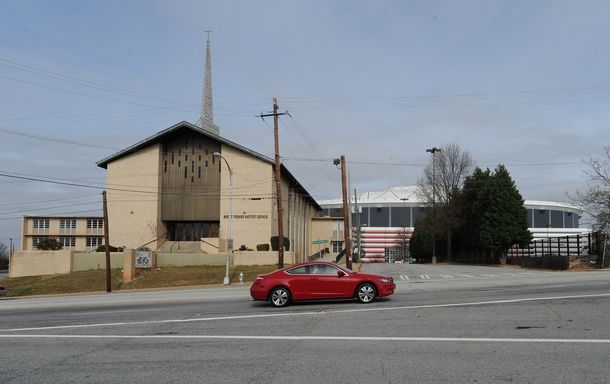 Historic Church to be demolished for new stadium! Members of Mount Vernon church in Atlanta, GA voted Thursday night to approve the sale of the church so the city can proceed with the construction of a new Atlanta Falcons stadium.  Mayor Kasim Reed, who pushed hard for a deal, released a statement about the vote, saying, “I am pleased that the congregation of Mt. Vernon Baptist Church was able to vote on this important matter.  “The decision tonight ensures that the Atlanta Falcons can continue pursuing their goal of building a best-in-class sports facility that will also expand economic development not only in the city, but also in the surrounding neighborhoods. Even though the church vote was 116 to 16 to accept the $14.5 million buyout, some members are not pleased. “I think it’s an abomination in the sight of God for the city and the Falcons to consider bringing down two historic black churches for a stadium for a second-rate football team,” said longtime member Vickie Johnson.

Allegedly, the whole purpose of this new stadium is to bring the Olympics back to Atlanta. Also, it’s been said to bring tourism in other words more money into the city. Atlanta is one of the fastest growing cities in the world #fact. A lot of people that are here are not necessarily from Atlanta anymore. People move here for jobs from all over the United States of America and all over the world. No matter what shape, size, or color you are you fit right in. We have historic sites that will always remain but, this church is a historic landmark yet is set to be demolished for a new stadium. The public’s view is split some people feel it’s a disgrace to want to start tearing down history for things that will cost more money to build. However some people feel that Atlanta is a city on the move and it’s time for change.  He rest don’t really care what do you think is it ok to start tearing down historic landmarks?