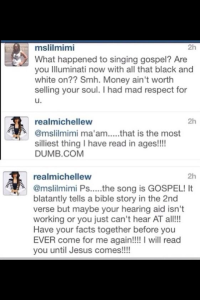 In case you were wondering, Grammy award singer/ songwriter Michelle Williams is NOT a part of the Illuminati and will shut you down if you try to imply otherwise. The former child of destiny recently released the new cover art work for her second single “Fire” from her upcoming album “Journey to Freedom”. The picture, posted on Instagram,  is of a glamorous Williams wearing a black shirt, what appears to be white pants and a black and white striped blazer. The look is completed with a dramatic, oversized derby hat and on Michelle’s face is a stern look. When she released the picture, it began to get complimentary comments from fans and reposts to show the support. One “fan” found issue with the photo and left a comment that ruffled feathers. “What happened to you singing gospel? Are you Illuminati now with all that black and white on?? Smh, Money ain’t worth selling your soul. I had mad respect for u,” she wrote.

Now this accusation is already ridiculous because anyone who follows Williams knows that “Journey to Freedom” will be an inspirational/ gospel album. Fans began responding to the comment and defend Michelle, but she didn’t need it. In classic Olivia Pope monologue style, “it was handled”. Michelle wrote back explaining the photo and the absurdity of the accusation. When I read it, I heard sass and attitude and I envisioned a neck roll or two. “Ma’am….. that is the most silliest thing I have read in ages!!!! DUMB.COM,” she replied. But she wasn’t done yet. “Ps….. the song is GOSPEL! It blatantly tells a bible story in the 2nd verse but maybe your hearing aid isn’t working or you just can’t hear AT all!!! Have your facts together before you EVER come for me again!!!! I will read you until Jesus comes.”

Instagram users gasped at the reply, but accepted the “burn” because Williams is often the recipient of negative comments and it’s refreshing to see her stick up for herself and protect her reputation. Guess it’s safe to say Williams’ soul is still securely anchored in the Lord.