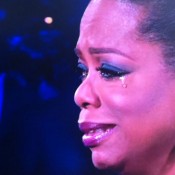 We all have our moments, and that includes media mogul queen, Oprah Winfrey. Her cable network is off the ground now, but I’m sure some yall remember it’s struggle when it first debuted. Let’s just say it wasn’t the most popular channel and that’s not the norm for something Oprah’s backing.  According to ABC News,  Oprah expressed her symptoms of a nervous breakdown in her interview with Access Hollywood. It was a combination of juggling her budding network and other projects that had Ms. Winfrey about to go off the “deep end” last year.

It was just sort of speeding and a kind of numbness and going from one thing to the next thing to the next thing,” Winfrey said, adding: “I thought … if I don’t calm down I’m going be in serious trouble.’ I was in the middle of doing voice-overs, you know? And I remember closing my eyes in between each page because looking at the page and the words at the same time was too much stimulation for my brain.

So when did Oprah have this revelation? It came when she was doing what she does best, being “Oprah” conducting a interview. ABC News reported that Oprah realized she was heading towards a mental breakdown while interviewing “Kony 2012” director Jason Russell (who actually did suffer a mental break down. He ran down the street naked and screaming; Google it).

Luckily, Oprah was able to treat herself and calm things down to get back her peace of mind but everyone on the verge of losing it isn’t always that lucky.  Here are a few questions to ask yourself if you think you’re heading toward this route.