What started as a simple shopping trip for some ended in empty shelves, full carts and hours of clean up for the employees. A Wal-Mart store in Springhill and another in Mansfield, Louisiana both experienced issues with the Electronic Benefits Transfer (EBT) system. For those unfamiliar with EBT, it’s the food stamp card. It’s a government issued card loaded with a certain amount of money monthly to be used for food purchases. The glitch occurred when the system that reads the cards and recognizes the spending limits, did not read any limit on the cards. Therefore giving users unlimited spending amounts.

Wal-Mart employees noticed the malfunction and called their corporate headquarters about how to handle the problem and they were advised to continue ringing as normal. “We did make the decision to continue to accept EBT cards during the outage so that they could get food for their families,” Walmart representative Kayla Whaling told CBS affiliate KSLA. She also added that Walmart was, “fully engaged and monitoring the situation and transactions during the outage.”

Word spread that Wal-Mart was processing all EBT transactions, even if you don’t have the funds on your card, like wildfire and even the police had to be called to help handle the crowds. According to police, no arrests were made.

According to CBS, a power outage during  standard maintenance caused the outage, according to Xerox, which hosts some of the transactions used by EBT system. When the problem was repaired, an announcement was made over the intercom informing shoppers of the repair. After the announcement, shoppers who were trying to take advantage of the situation literally left empty carts in aisles and shelves bare of food. 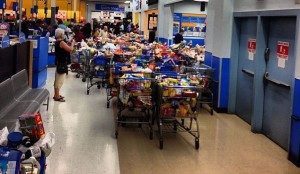 Look at it like this, if you don’t have the money to purchase the items, yet you take advantage of a system error and get the items, sounds like simple theft. Now look at it like this, the corporate headquarters authorized the transactions, to they basically gave the food away. What do you think? What would you have done?