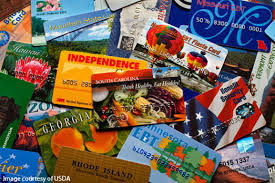 The state of the economy has taken its toll on many American consumers and their families. With unemployment and low-income, there are not many options left to support a family when there isn’t enough money to go around. Everyone at least wants their basic needs met (food, clothing and shelter) but when you can’t even manage to do that, then what do you do? For many people, that’s where food stamps come in. Food stamps are great in the sense that they help families or individuals meet their basic needs but it’s not all that great for the economy as a whole when too many people become dependent on them. According to World Magazine, 47.5 million people are on Supplemental Nutrition Assistance Program or SNAP. Lord Jesus it’s a fire! Food stamps cuts to be made today! One of every seven Americans will take a hit today (Friday) when a $5 billion cut in food stamps, the first across the board reduction in the history of the decades old federal program, takes effect.

If conservative Republicans in Congress get their way, this week’s pullback may be just a taste of what’s to come for some of the almost 48 million Americans who receive benefits under the Supplemental Nutrition Assistance Program.  SNAP, the largest U.S. anti-hunger program is designed to help poor people most of them children, disabled or elderly – buy food. But enrollment has doubled and the program’s cost has nearly tripled since 2004, and has remained at record levels even as the economy improves and unemployment declines.

Critics say the surge shows reform is vital as part of federal deficit reduction. Defenders say the high enrollment is a sign of the weak recovery from the 2008-09 recession and sluggish job growth.

The cuts on Friday reflect the expiration of benefits authorized by the 2009 economic stimulus package, just as other temporary elements of the package – including a two-year payrolltax “holiday”  have ended over time. The Center for Budget and Policy Priorities, a think-tank that explores ways to reduce poverty, said benefits would drop by an average of 7 percent, or $10 per person per month.

In fiscal 2012, the average benefit per person was about $133 per month, according to the U.S. DepartmentofAgriculture.
Anti-poverty groups have for months warned of the dangers that the cuts pose to many vulnerable aid recipients. It will mark the first time benefits have declined for every recipient, regardless of need.

“People are living at the margins,” said Ellen Vollinger, legal director and SNAP advocate at the Food Research and Action Center, an anti-hunger organization. “It’s not an abstract metric for people. It’s actual dollars to keep food in the refrigerator.”

A family of three would lose $29 in benefits, enough to buyfood for 16 meals at current “thrifty” rates, said Vollinger. That comes to $1.81 per meal.

For U.S. grocery store chains, the reduction may have only a minimal impact, equal to less than 1 percent of the about $715 billion a year spent by consumers on food and beverages for consumption at home. But the industry is highly competitive and operates on thin margins. Some chains are likely to feel a bigger impact than others.

With roughly one in seven Americans now enrolled in SNAP, the program currently accounts for a full 11 percent of total spending on “food at home,” as the government phrases it.