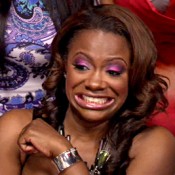 The “You Gotta Stay Prayed Up” singer and star of RHOA Kandi Burruss, has been hit with a cheating scandal! Where’s Olivia Pope when you need her LOL! Sadly, Kandi has supposedly fallen prey to the ancient act that is the downfall to so many relationships. According to RadarOnline, Cynthia Bailey spoke up about Kandi’s alleged cheating fiance Todd, that was addressed in last night’s season six premier of the show.

This news would be doubly disheartening if found to be true since Kandi’s last preparations towards walking down the aisle fell short when her fiance, Andre died a few years ago. So the question is has Todd been having Kandi Koated nights with someone else? Well Cynthia doesn’t confirm or deny the rumors with Radar, but she does give some sound advice.

As reported by RadarOnline:

The best advice I can give to Kandi and to anyone who has been phased with cheating rumors — because I’ve certainly been the victim of it as well — is to just ask the questions, Cynthia said. Ask your man what’s going on and just kind of move on.

Unless you have reason to suspect that there could be some validity to it, for the most part, it’s usually just rumors, she says. Our guys know that if they cheat, who are they going to cheat with and us not find out? Everyone knows who they are.

Very true Mrs. Bailey. However, that doesn’t mean the RHOA men or any other male won’t commit the act. In the heat of the moment, very few rarely stop to think and rationalize their situation. If they did, the aftermath probably wouldn’t be so catastrophic i.e burned down homes, beat up cars, highly pissed off wives/girlfriends and drunken nights of I shoulda, coulda, wouldas.

Kandi, we hope these rumors turn out to be false but if skeletons just so happen to be pulled out of closets, just remember that you’re talented, ambitious and RICH! And  can certainly do better than a cheater, so fly above and keep pushing.