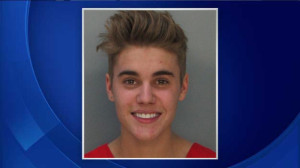 Between the drug rumors, the sexting scandal and the egging incident, its seems like Usher’s protege, Justin Bieber is spiraling out of control. Recently, the Biebs has his house raided and he friend Lil Za was arrested. And remember the woman who accused Justin of fathering her kid? Well, the negative press continues.

According to CNN, 19 year old Bieber was arrested this morning in Florida on suspicion of drag racing, driving under the influence and resisting arrest. Miami Beach Police Chief Raymond Martinez spoke with reporters and told them that Bieber failed the sobriety test and later “made some statements that he had consumed some alcohol, and that he had been smoking marijuana and consumed some prescription medication.”

Two SUVs “actually blocked the traffic at 26th and Pine Street so that they could race on Pine Street, almost making it like a makeshift race track,” Hernandez said. Police pulled over Bieber’s yellow Lamborghini because he was driving 55-60 miles per hour in 30 miles per hour zone. When they pulled him over, “he was a little belligerent, using some choice words questioning why he was being stopped and why the officer was even questioning him,” Hernandez said. Bieber’s friend, driving a Ferrari was also arrested.

I think this is a classic case of a child having too much money and too much power. I don’t think there is much his parents can do. At this point, Bieber is 19 and pretty much the bread winner for his family, so can he be controlled? How do you reel in a young adult who pays your bills and one of the biggest pop stars of today?