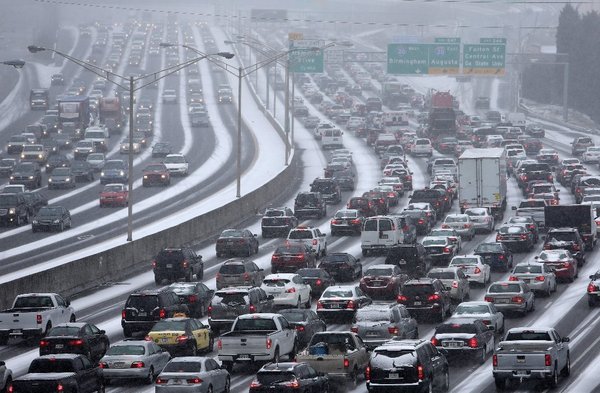 As I type, there are STILL plenty of people stranded on icy roads, twiddling their thumbs in  idle cars or wandering the streets of Atlanta. The peach state is known to have unbearable heat waves and temperatures during the Summer months but they rarely get to experience snow storms! I know that those who are northern breed are probably having a good laugh at our expense but for those who were or are still trapped on a freeway somewhere, this is no laughing matter.

So who’s to blame for paralyzing a whole city? Well, apparently no one wants to be held fully accountable. If you’ve been watching the endless news coverage on this weather disaster like I have, then you probably saw the uneasy press conference with Governor Nathan Deal, Mayor Kasim Reed and the Georgia Department of Transportation earlier in the day.

Basically, all parties placed blame on someone else or other sector of government while hundreds of school children were still stranded at schools, icy roads remained unsalted and abandoned cars lined the streets and highways. CNN reported that Gov. Deal  said the “region was caught off guard by weather predictions”, ( aka, they didn’t do their own research ). CNN also reported that Mayor Reed threw a chunk of blame on  local Atlanta businesses, saying they “contributed to the gridlock by letting workers leave at the same time as schools” (even though closing schools early yesterday morning might have prevented a lot of the hold up in the first place).

One positive thing I can say is that there seems to have been an out-pour of good samaritans out yesterday and even still today, that have been offering tows/rides, supplying hot chocolate and even food to those stranded with no means to get anywhere. However, that little ray of sunshine on this very cold, icy day is of no releif to those who had to brave frigid tempertures and abandon their cars to walk home, the angry parents that never got to pick their kids up from the bus stop yesterday or the scared hungry kids forced to stay wayyyy after school.

I can almost guarantee that more heads will roll once this nightmare of a winter wonderland clears up. I bet Atlanta citizens will let their voice be heard this time come the next city elections with this memory stuck in their brains!