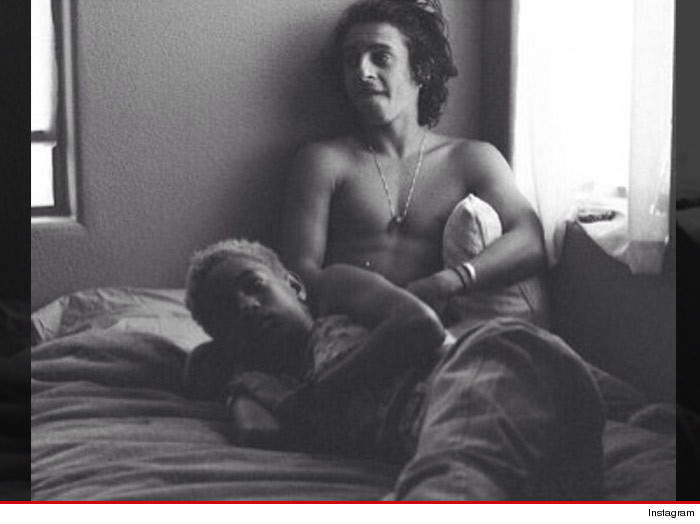 I guess it shouldn’t be a surprise to us common folk when we learn about the happenings in Hollyweird these days. Take a look at the picture in this post. At first it may not sound any alarms, seeing two teens hanging out together possible watching TV, maybe even a boyfriend and girlfriend duo just spending time together is what you perceived from the photo. BUT here are the facts of the matter….

A. The two people in the picture are not just ordinary people with no place to go, they’re allegedly celebrities Moises Arias and Will and Jada’s seed Willow Smith.

B. Assuming that these uncandidly familiar faces are who we say they are, Moises is 20 YEARS OLD and Willow is 13.

C. Moises is shirtless, laying on a bed…with a minor.

Now in the real world, this would be a questionable scenario. If little Willow was just a civilian middle schooler here in the greater Atlanta school district and a photo was circulated through her school and community of her in bed with a 20 year old male, I’d imagine that a great deal of concern (or at least I’d like to think it would) would arise in her also pretend civilian parents Will and Jada Smith. Letters would be sent out regarding the inappropriateness by school officials and some  Atl police department members would probably pay the 20 year old a visit for some questionable behavior.

BACK TO THE REAL WORLD….

This photo was initially credited to the Instagram account of Moises but has supposedly been deleted since it’s initial debut. BUT oh the wonder of technology and even more specific, the screen shot. It may be deleted off his account but not before everyone could save it to create backlash on later.

Whether they’re friends, best buddies, play, play brother and sister or whatever they want to justify it with, what’s wrong with this picture? Do you think it’s innocent or just plain inappropriate?