Madonna Madonna! She always has the crowd talking!

The musical network was stunned by Madonna’s Prince Tribute on the MTV Billboard Awards last night. She performed the hits Nothing Compares to You and Purple Rain. Among many, some words that floated through social media to describe her performance were “not-soulful, not black enough, too humorous, unappreciative, and all around fake!” BET immediately capitalized on the media’s backlash by airing an advertisement for their upcoming awards show with the words “Yea we saw that. Don’t Worry, We got you.” Now we love Madonna and her artistic expression. So the question is what happened?

Was it her pitchy and incomparable vocals or her blatant confidence in the bizarre diversification of his representation? With it being Madonna-a controversial and prolific woman herself, and TVs first major tribute to Prince since his death, I’m sure we can admit to distorted expectations. People have mentioned her relationship with Prince, her music style and ability to sing, and even cultural appropriation when criticizing her performance. The truth is, Madonna’s tribute was not horrible, most just misunderstood her rendition of the great Prince. It was simply a different sound, a different style, but never the less graceful and entertaining. I believe her performance was befitting of an MTV award show and its fair to expect significant differences when watching the Grammys or BETs awards show even down to song selection. Each award show will have its opportunity to take on a Prince tribute . We can’t wait to see how those work out! Madonna responds to critics in the pictures below! 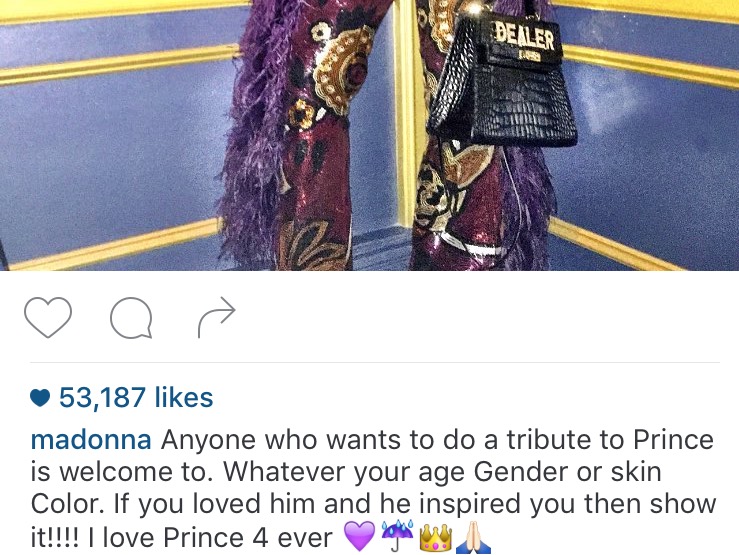 Do you think the media’s backlash necessary? Why or Why not?