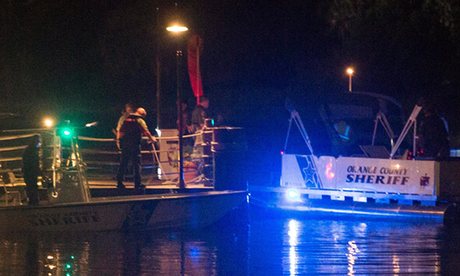 Alligator at Disney World Drags 2-year-old Baby into the water from Beach!

Yesterday at the Seven Seas Lagoon in Disney World, Orlando, Fl, a 2-year-old baby was dragged into 6-ft water by a seven-foot alligator. Immediately after, the park shut down all of its beaches and began an intensive search for the boy killing and dissecting at least 5 alligators.
According to several sources, the father of the child tried to rescue the boy from the alligator. Park officials say that there is no lifeguard assigned for the area because the park rules forbid you from entering the water at the beach location in question. There are “no swimming” signs posted in the area but no real explicit warnings that alligators may emerge from the water.

Today, the body of the 2-year-old was found about 9-11 feet away from where he was first snatched by the reptile. The body was intact and medical officials believe that the child drown.

First there was the gorilla and the baby and now its the alligator and the baby within the same month! The family of the boy, Nebraska natives, are most likely absolutely stunned by this heartbreaking event. What is going on with parents and their children at theme parks? Why are parents losing their children to senseless situations? Accidents happen, but such acts should not be normalized.

I think each story teaches us that it is extremely important to watch our small ones closely and abide by park rules. This story is unbelievably sad and we remorsefully send our condolences to the boy family and friends.

Learn more about the grizzly tale of the father wrestling the alligator visit:

Father Tries in Vain to Wrestle Toddler From Jaws of Alligator at Disney World Resort: Sheriff