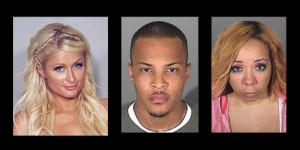 Imagine coming from a party and being pulled over after a routine traffic stop. A little inebriated and somewhat high, you and your friends quickly try to hide the evidence that could land you in prison. After asking the protocol information, the police officer happens to smell marijuana and asks you to exit the vehicle and leave all belongings as well. After a thorough search, the officer finds contraband, you are slapped in handcuffs and carted away to jail, where you are incarcerated for a minimum of 6 months, 2 years probation to follow, and a hefty fine to pay. You lose your job, house, and car.  Your family is disappointed. Furthermore, you now have a felony charge on your record, which almost eliminates your chances of being gainfully employed again. This punishment would happen to any average person on the street: you, me, your professors and church members, family and friends. But NOT to celebrities!

Three different people, placed in the same situation….same outcome. Paris Hilton was arrested for cocaine possession, despite allegations that the purse containing the drugs wasn’t hers. T.I. and wife “Tiny” were arrested Sept 1 for possession of a controlled substance. But…there was no “6 months minimum in jail”…in fact, both parties WALKED out of jail less than 12 hours after their arrests. Hilton was released in 3 HOURS! T.I. and his wife were released EARLY early the next morning, around 4:00am. They both had to post $10,000.00 bail, but still…they just WALKED out. This is especially disappointing in T.I.’s case – he was granted “supervised release” and ordered NOT to illegally possess a controlled substance.

My question is of a double standard: is it fair for celebrities to have “special treatment” in the prison system that average people don’t? Do you think that it helps to keep order in the system and prevents chaos? Do you think that this is abuse of the law?

Let me hear your thoughts on the blog!

We at AskDrO.com believe in balanced mental health. For a great start, take the Dr. Owens Mental Health Prescreen Assessment and check your mental status!