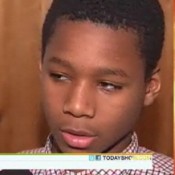 Nadin Khoury endured numerous attacks from 7 teens and will testify against them.

13 year-old Nadin Khoury is your ordinary teenager, the son of Liberian immigrants and a normal, everyday student. But Khoury is small, well-spoken and studious, traits which are “sniffed out” by gangs of bullies nationwide. On his way home from school one day, Nadin was attacked by seven boys from his school, and endured punching, kicking and terrorizing behavior from the gang. Ultimately, Khoury was pushed in a tree and subsequently hanged from the fence of his apartment complex. These boys, says, Nadin, are the main culprits in a string of related harassment claims by other students at the school.

This “wolf pack” of teenage boys’ absent-minded attacks was videotaped by one of the gang members. The videotape, confiscated after police arrested the boys in the gang, shows the horrifying events of Khoury’s assault as he is laughed at while being abused. Even MORE shockingly, a woman walks into the calamity and, despite Khoury’s cry for help, KEEPS WALKING PAST HIM!

We have GOT to do better than this! A helpless teen is being bullied by more than five bigger students, but no one does anything about it? However, a community is upset when police don’t arrive on the scenes of a crime early enough? What if Nadin was your child, and you were watching the video? You would call the National Guard, your church members, their friends and everyone else to come and help (and let’s not forget you would want to sue the parents of the boys who terrorized your son…) It’s no wonder the rate of suicide completion in young Black males continues to stay on the rise!

This isn’t the first time Khoury has been harassed by this group of teens. The abuse has been so unbearable, to the point that his family is willing to leave town. Even after coming to school administrators about being bullied, Khoury says they have done nothing  at all. Luckily, though, he will have his day in court; he will have and take a chance to testify against his attackers. He encourages other bullies to speak out against their crimes, especially when in a community that won’t hear cries for help.

The world needs more teens like Nadin to guide our youth to a better method of being heard. Each year, countless students are being bullied or harassed simply because of their differences. Difference of race, religion, style, etc. IT HAS TO STOP! Some parents are unaware that their children are doing the bullying, or maybe they don’t even care! Even still, every child has a right to safety, including safety while in the schools, and while walking home from school. To me, Nadin is a hero in every spectrum of the word, speaking up for what is right and standing fearlessly in the face of adversity instead of cowering in the shadows!

AskDrO has touched on the subject of bullying in our schools and communities. Victims of these kinds of attacks later suffer from depression, anxiety, anger management issues and other mental illnesses. If you suspect your child, or even yourself, is a victim of bullying, don’t wait! Get help now by taking the Dr. Owens Mental Health Prescreen Assessment, and get the mental health that you deserve!