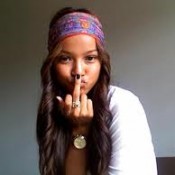 The saga of Rihanna, Chris Brown, and Chris Brown’s new girlfriend, Karrueche Tran, continues. It is unbelievable sensationalism that may land Chris or one of his girlfriends in jail. I am not so sure who should go at this point.   I really believe that they have forgot about Chris’ current troubles lurking in Miami.  He needs to be far-far under the radar.  This is certainly not going to do that for him.  Maybe  in the heat of their passion they have forgot that he is on probation-and revocation could mean a long prison sentence.  As a mental health professional,  I can’t even begin to digest or understand the psychopathology of these two young ladies who are publicly fighting over a man with known and visible anger management issues. Enough said!

Last week, Rihanna tweeted a photo of rice cakes in sunglasses, saying “Ima make you my b*tch.” Many took the bizarre tweet as a dig at Chris Brown’s new girlfriend, Karrueche Tran. This is believed  because Karrueche is Vietnamese and rice cakes are associated with her culture. As bizarre as it sounds it is the truth.  I am so glad that Ms.Tran did not take a culture stab at Rihanna. Things could have really gotten real ugly.
Karrueche responded by posting a line from Nicki Minaj’s “Stupid H*e” on her Facebook page, writing: “’I’m Angelina (sic), you’re Jen. C’mon you see where Brad is at.”
Whether or not Rihanna was attacking Karrueche, her fans certainly did, tweeting Chris’  girlfriend messages like “I hope Rihanna beat the dog s–t outa yo a**!” and “I will kill you.” This is simply preposterous!  The threats have gone over the top and now we have entered the danger zone.

Sources tell TMZ that Karrueche took these tweets very seriously. The poor girl is apparently afraid for her own safety, and now refuses to leave the house without one of Chris’ body guards at her side. I don’t blame this young lady. Threats should always be taking seriously. Just when you let your guard down is when there could be a serious attack. After all, Rihanna really loves Chris and this could be looked at as a love triangle. Love triangles are dangerous and can be fatal.

This is an excerpt from my e-book, “Am I in A Bad Relationship?”

Many of us have fallen prey, at one time or another, to the dreaded love triangle. I am sure you are wondering what I consider to be an active “love triangle.”   Well, here is my definition: a love triangle occurs when: there is an intimate relationship knowingly or unknowingly, between three individuals, all of whom may or may not have been aware of being in a “triangle” at the time it began.

In this triangle, you may be married or in a committed relationship with someone and are cheating on your significant other; you may be the one being cheated on without even knowing about it; or you may be a single person who is either aware or unaware that your partner is already in a supposedly “committed relationship.” Some people even have sex with their married co-workers or bosses at work, which puts them at risk of being terminated due to acting inappropriately in a work environment. However, what usually happens is that when this relationship dissolves, so does the comfort level on the job.

Lust and sex can be addictive for many people. However, if you are in a serious commitment or if you stay sexually involved with someone that you know for a fact has a girlfriend/boyfriend or is married, you are putting yourself at risk for emotional, mental and possible physical pain.

Yes, there are people who feel safe in relationships with people who are already involved with someone else. They will say, “I know exactly what to expect in this relationship so there are really no surprises or high expectations between me and my partner.”  You might even be one of those people who agree, and yes, you’re allowed to have an opinion. However, will you have a change of opinion when I tell you this type of relationship’s possible side-effects? Here they are:

Whether you are the married person in this relationship or are the single one, if you and your partner have unprotected sex, you have to remember that your partner could be having unprotected sex with other people (his/her wife or husband or additional lovers) and just who are all of those other people having sex with? Are they using condoms? Sure, you may demand that you and your partner use a condom during sex, which will greatly reduce STDs passed through genital contact, but condoms don’t always work—tearing can occur or the condom can be less effective in protecting you against STDs passed through fluids from the genitalia. Also, if you haven’t used a dental dam during oral sex, you may be at risk for contracting any STDs passed from the genitalia to the mouth. Who knows who else your partner has been with?

What if you and your partner don’t always use a condom? If you’re a woman and you become pregnant, you may want to keep this child, but your lover may not want to keep the baby. If he is married or has a serious girlfriend, don’t fool yourself into thinking that what he wants to do is end his long-term, steady relationship with his partner to be with you and your unborn child. Also, if you don’t have health insurance, you may not even have enough money to get an abortion. Will you be ready to take care of a child if you don’t even have enough money, ironically enough, to get rid of one? Can you see yourself actually giving up your child for adoption?  Are you prepared for your partner’s refusal to leave his/her partner for you and your new child? If you are a man who has taken on another female partner in addition to your wife or girlfriend, are you prepared to be in a situation where you get a woman pregnant and she wants to keep your baby and legally bind you to taking care of it? Wouldn’t this ruin your serious relationship or even ruin you financially if your budget is not ready to include a new child?

(End of Excerpt)
What is the most interesting is that all of this “rumble”over the man who was convicted of assaulting Rihanna (Party #1 in the Battle) before the Grammy’s in 2009. I refuse to go back into that saga. Where is all of this leading too? I do believe that someone could possibly get hurt.  After all, the  tweets are both violent and disparaging.

Please leave your comments on the blog. Weigh-in on this issue. I really would like to hear from you.

By the way, pick-up my book from Amazon http://amzn.to/AcFVio. It can really help in bad situations like this one.