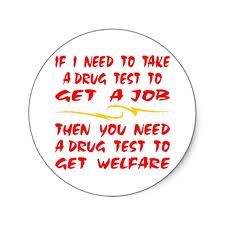 The states are getting MUCH tougher on Welfare Recipients. Now they are beginning to require MANDATORY drug testing. I am NOT opposed to this new process. You will have the opportunity to disagree later on after  the post. LOL  I think that it is simply ridiculous what is going on in some communities.  For example,  have you ever been in the grocery store and someone walked up to you and asked, “Would you like to purchase some food stamps?” I have. Of course I said No!  I am sure many of you were just dying to hear my response. (smile)  This is just not a crime that I would commit.  Taking food from some helpless child to help their parent(s) get a fix or do whatever they would do with the money exchanged is just awful in my opinion.  I just can not imagine doing this and I hope that none of my readers are participating in this fradulent behavior.  However, I do think that it is worth a blogpost. Should states require this MANDATORY drug testing?

Check out this video and then respond to the questions;

CONS
Children may be left  pay the price for their parents’  transgressions
Cost to drug test individuals is reportedly high, in some states

This is a problem for many people and states are now being forced to do something.  I am NOT sure what will be accomplished with these new rules but I will wait it out to see. The economy is attempting to recover and all hands really need to be on deck.  Now I am sure that there are some people who genuinely need  some temporary assistance but the generationally cursed families are what have put me in a conundrum.  Society will NOT be able to continuously support those who make NO effort to stimulate their own economies.  They should at least attempt to get a job or start their own business. No you don’s have to have a college degree to enjoy “Free Enterprise.”  Although education surely helps, there are many who would challenge this statement otherwise.

Once again, thanks for stopping by,