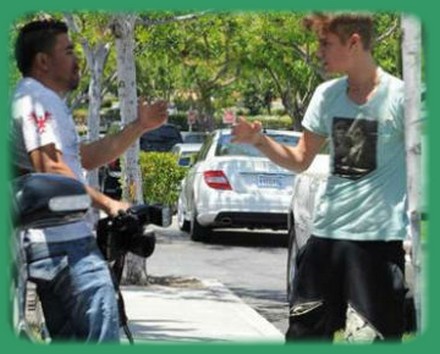 Teen Singer, Justin Bieber, 18, is wanted for questioning by Los Angeles County Sheriff’s investigators after a photographed complained about being roughed up by the pop star at a shopping center.  Now, let’s rewind a bit.

Justin Bieber and his girlfriend, teen actress Selena Gomez, were seen heading out of the movie theaters at The Commons at Calabasas.  A paparazzi photographer, later identified as Jose Sarros, attempted to take photos of the couple.  Immediately, things went sour!  Sarros parked his car behind the couples’ to where they could not exit.  Justin then got out to ask the man to move.  Sarros refused and Bieber just roughed him up a little bit.  Lt. Robert Wiard said that Sarros contacted 911 on Sunday complaining that he was feeling pain in his chest from the altercation between himself and Bieber.  However, Justin and Selena had left before authorities arrived.  Sarros was then taken to a hospital where he was treated and released.
The case of Justin Bieber and his paparazzi’s scuffle is heading up to the Los Angeles County District Attorney, a route that seems to be common for high-profile cases.  If he is charged and convicted, Justin Bieber could face up to six months in jail.

On top of all of that, a bystander communicates that a lawyer went up to Sarros saying that he had saw what happened.  Also, the lawyer suggested that Sarros run with it because he could get a lot of money from it.  Another eyewitness said that only words, no fists, were exchanged! Well, that’s good news!  But the situation is becoming more than it probably should have.  A charge of misdemeanor criminal battery seems to be a little harsh for the event, but that is what Sarros filed.

Jose Sarros finally speaks out about the altercation saying that he doesn’t have a lawyer — “yet.”  He adds that the allegation of him speaking with a lawyer is a lie (!!!) and he cannot speak any more about what happened.  Jose Sarros, nicknamed “Bruja” is sticking by what he believes in!  The photographer has a reputation for having a black belt in karate.

The day of the altercation Selena Gomez was very patient and mature about the situation.  She hopes that Justin doesn’t get into any major trouble!  Justin seemed to have reacted calmly on his Twitter and Facebook accounts.  He posted on Twitter, later on Sunday night, “gonna focus on the important stuff. the music. #DieInYourArms hits ITUNES in less than #24HOURS – #BELIEVE”  He then posted on Facebook, “THANKS YOU SO MUCH to my fans for always protecting me and being there for me. I can’t thank you guys enough. I’m sorry I had to rush out. Love you guys.”  The Bieber seems to not be as focused on the situation too much, and pushes the focus back on his rising music career.  I’m pretty sure if the words “GO STRAIGHT TO JAIL. DO NOT PASS GO.  DO NOT COLLECT $200!” were thrown in his direction, his attitude will change.

The moral of the story: Bieber needs to just continue watching what he does in public.  He doesn’t need any unnecessary attention to his personal life.  The more the world sees him as a businessman, the less worries he will have.

As for Jose Sarros, I sure hope you are not pursuing this case for ‘a lot of money of it.’  I genuinely hope these are not efforts to get in the paparazzi YOURSELF! LOL.

As always, post comments below on what you’re thinking. 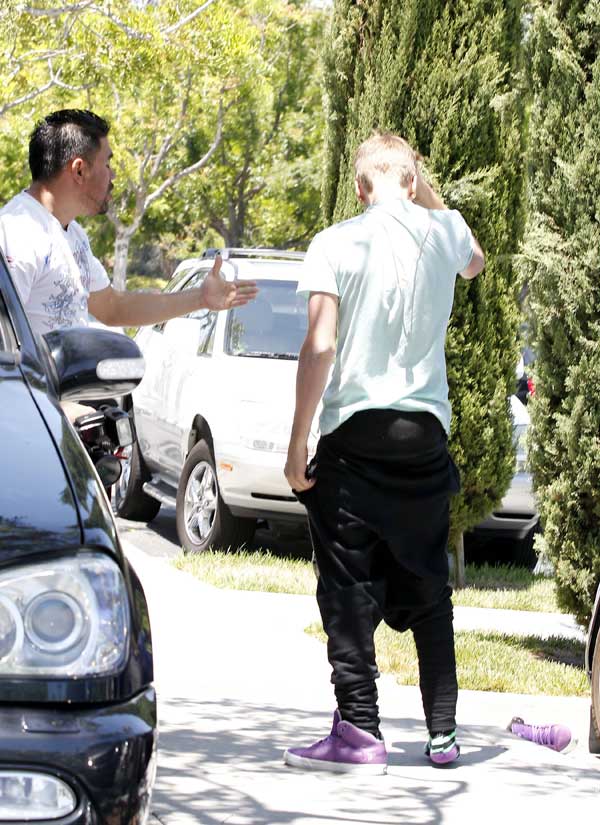