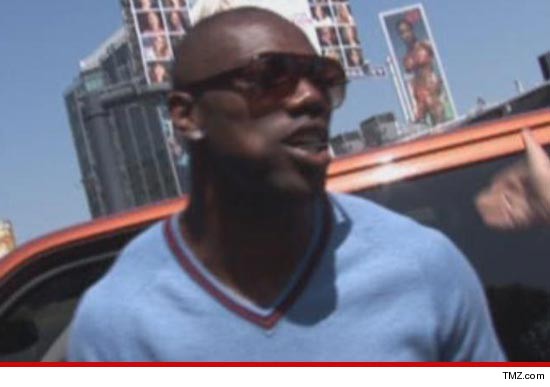 Terrell Owens’ past couple of year have been bad, and they seem to be getting worse!  The football player has been kicked off many teams in the past and they haven’t seem to stop.  Owens was recently booted from the Allen Wranglers, an indoor football team.  According to team president, Tommy Benizio, his release was “performance based.”   Owners had had enough when T.O. allegedly missed a team visit to a children’s hospital in Texas.  But he’s missed his own children’s visits, so why would he do any differently.

T.O. has fallen hard out of the public’s graces as he made an attempt to open up on his reality show The T.O. Show.  His career has spun out of control over the past decade as he has been in rehab for his torn ACL in hopes of “attracing a NFL team” but settled for an IFL team after not being asked by any other team.  Many say no team wants him because of his cocky attitude.  You can’t be injured and still cocky!  It doesn’t mix well.  Allen Wranglers Owner, Jon Frankel, states “It’s disappointing and unfortunate but he could no longer be tolerated by the Wrangler Organization.

It seems like Terrell is his own enemy because he gets chance after chance but he fails to perform.  His behavior has not only made him unemployed and broke, but he also has loses his stake in the franchise.  Obviously, T.O. is ticked off and is considering a lawsuit against the Wranglers… claiming they breached his contract.  Sources say that he’s upset because he believed that the team visit to the hospital was not mandatory according to his contract, believing the team is in breach.  He wants a public apology and $160,000 (4 games pay) or he’s taking it to a judge.

First and foremost, (as unfortunate as it seems) Terrell is to blame for these similar mishaps.  This man has been booted off of MULTIPLE teams for the same reason, his attitude.  Obviously, Terrell still carries that cocky attitude as if we shooting for The T.O. Show.  He is mistaken, and the executives of The Allen Wranglers have showed him (just like every other team he has been a part of) that he is not a necessity!  There are plenty of young, eager males that would love to take his spot and cash if you know what I mean.  I don’t think that T.O. realizes that even on top of that he is injured!  No owner wants to pay a player that is hurt and has a stank attitude!  It would never work because T.O. has yet to learn humility.

In reference to the hospital visit, I just cannot wrap my mind around why Terrell thought that a “team” visit does not include him?  Terrell claims that according to his contract, he was not obligated to go.  For some reason I can’t believe it!  If he had signed a contract saying that he was not required to do any team activities other than practice and games, the owner would not have reacted in that manner.  And this incident would have never made its way to the media so abruptly.  It would already had been made known that he was a “special” player in which he doesn’t have to join in on certain events.

I know we all are tired of talking about Terrell Owens, but leave your comments below with your opinions!  We need your feedback.