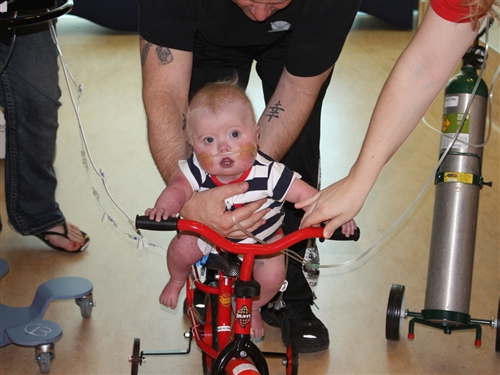 Diane Roberts has a 21-month-year-old baby boy, Ryan, who has only a few weeks more to live.  Mommy Diane has only one request – she wants other parents to see their children smile.

Ryan was born with down-syndrome and a congenital heart defect.  After a recent surgery, doctors told Ryan’s parents, Diane and Erik, that there was nothing else they could do for his heart.  The couple gave it some thought, and made a painful decision to cut off Ryan’s supportive care and sign a DNR (do not resuscitate).

Like other families who have faced the grief of learning their child won’t live much longer, the Roberts family created a bucket list.  They imagined that this would help everyone get through this troubling time.  And boy were they right!

So far, Ryan has pet a puppy, played with finger paint, gotten a speeding ticket in the middle of a hospital hallway, and even drank a (root) beer for his 21st (month) birthday!  How cute!

Diane and Erik began receiving questions how her family and friends could help or what they could do.  They always responded that they didn’t want anything.

“I said, just go create a memory with your kids. Just go put a banana split down in front of your kids for dinner and watch their faces light up. No chicken, rice and broccoli tonight, just ice cream. They’re going to remember that forever,” said Diane.  “Watch them smile.”

“I am throwing Ryan his very own Banana Split Party. Although he will not be able to have one, I thought it would nice if we could all have one for him, whether you have children or not. So some night for dinner, have just a banana split but take a picture and post it to Facebook event page so they can see all the people that are fulfilling their wish!!! So who cares if your children don’t get their veggies one night for dinner, allow them to “break the rules” for just one night and think of a special little boy while you’re doing it!!”

The initial 200 participants Melissa invited grew to over 300,000 Facebook invites and 25,000 people “attending” by June 20, only two weeks later.  All over the world, families have posted pictures of their “Banana Split Dinners” in support of Ryan and his family, also posting their positive messages on the page.  Grieving mothers and fathers have even shared their own story in hopes to encourage Diane and Erik.

This is only one example of how social networks can be used to bring communities together.  In Texas, a 4-year-old with terminal cancer Dyrk Burcie, has inspired a similar movement.  Firefighters who work with Dyrk’s father, Dameon, organized a photo shoot to spell out the little boy’s name with fire.  Other firefighters caught the idea and began to post nice messages.  Now, Dyrk’s Facebook page is full of pictures of fire departments, sports teams, and community members dedicated to Dyrk.

To see pictures of families supporting these children, click here:

We wish grieving families all over the world the very best!