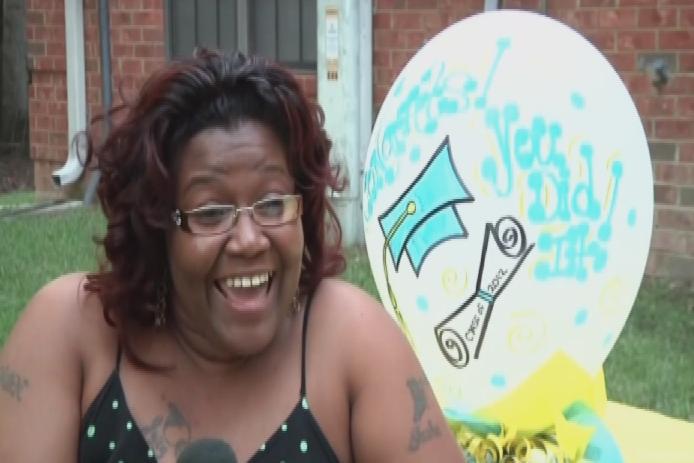 A South Carolina mother was arrested at her daughter’s graduation.  The reason?  Not for being violent and totally disruptive, but for cheering for her baby girl as she walked across the stage.  Totally over the top!

When the mother was later asked about her feelings towards the incident.  Her explanation, “Humiliation.” “I don’t even think humiliation could describe how I felt,” says Shannon Cooper.  Like many parents worldwide, she says that it was only natural to celebrate the moment of her daughter, Iesha, who graduated from South Florence High School.

Cooper says she was ‘going to cheer.’  Recognizing that it was hard work to have reached that point.  However, the high spirits of the day took a sharp turn when Cooper was arrested and taken outside to an awaiting police van for 45 minutes.  From there authorities escorted her to a detention centre and kept there for several hours before posting bond for a little over $200.

Being charged with disorderly conduct, Cooper responds, “She’s going to remember for the rest of her life, ‘My mama went to jail on my graduation day.’ ”

Police say that it was announced if anyone cheered or screamed, they would be escorted out of the building.  Ken Lavigne talked about the incident.  He states, “It’s not unusual for an enthusiastic relative to cheer enthusiastically when their particular grad crosses the stage.  Sometime it can be humorous.”  He adds that some cheering adds to the enthusiasm of the ceremony.  The problem occurs when the cheering makes the next student’s memory be lost.  “It can be disruptive in that the next graduate being announced, the audience might not hear her name. And that’s unfortunate.”

Lavigne says that it is extremely disrespectful when people leave after their graduate’s turn across stage.  “We ask out of courtesy that everyone stay for the whole ceremony, so it doesn’t melt down after Johnny crosses the stage,” says Lavigne.  When he was asked if it was ever serious enough to get police involved, he responded, “Certainly not.”

This case in South Carolina isn’t the only crackdown attempt from police in the United States.  Ten members of a Tennessee high school graduation class had their diplomas confiscated because they had decorated their graduation caps.  There was another situation where a high school graduate was denied their diploma by administration at a high school in Ohio.  The graduates family and friends were ‘overly boisterous’ during the ceremony and he was ordered to complete several hours of community service before his diploma was returned.

One thing I would like to address is the excitement of the police.  Their actions had ruined an innocent graduate’s day.  Iesha, nor her mother Shannon, didn’t do anything unlawful.  I’m not if police made the “No Cheering” announcement, or even if they’re allowed to, but the fact of the matter is the ceremony was one of celebration.  Each and every parent in the audience was proud!  For the whole graduating class, but especially for their specifics.  I feel as long as the parents and family friends didn’t disturb the ceremony in a whole, their cheers should have gone unnoticed.  If police would have found it morehumerous, like Ken Lavigne suggests, maybe the graduation would have placed a smile on their faces too.

How do you feel about the crackdown from police on graduations?  Is it justifiable or completely over the top and should be stopped?  Before you leave your feedback, check out the video below!