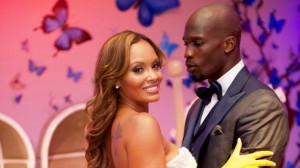 Chad Johnson and Evelyn Lozada called a quits after only two months of marriage. Many of you remember the alleged head butt incident between Johnson and Lozada which ultimately lead to their nuptial demise.

According to E! News, a Florida judge signed their papers this morning. “The hearing was very quick and very procedural and only lasted for three to five minutes”. Neither party was in attendance.

The pair was engaged for two years and tied the knot in Miami on July 4 of this year. The couple was scheduled to be featured in an upcoming Vh1 reality show, Ev and Ocho, but the network opted to swiftly cancel the series after the incident.

Do you think Evelyn’s speedy actions will help her stance against domestic violence despite her contrary behavior on Basketball Wives?