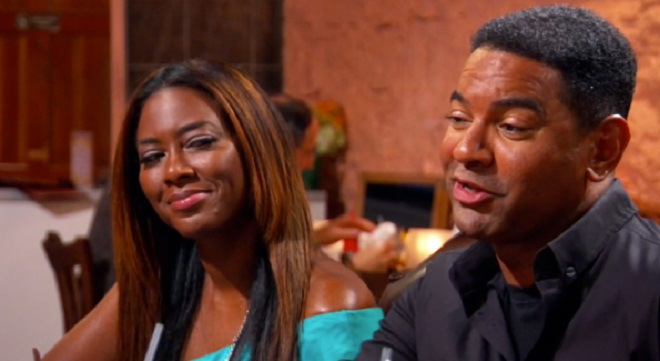 Yesterday we informed you that newcomer to The Atlanta Housewives reality show Kenya Moore, was put on blast by her “so-called” boyfriend Walter Jackson. Jackson spilled the beans to Atlanta’s own Frank Ski and Wanda about how he and Kenya’s relationship was strictly for the show. He did admit that they dated three years ago but said it was only for three months. Now that Moore’s fabricated relationship ploy has come tumbling down, she’s fired back at Walter (probably out of sheer embarrassment to say the least).

Here is Kenya’s official statement about the matter as reported by Diva Whispers:

The truth is and has always been that I want to be in a loving, honest,  long-term relationship with someone who genuinely loves me for me — Walter’s  recent statements are completely false. I am embarrassed that I allowed a  deceitful and hateful person in my life. He says he ‘did it for fame.’ I’ve  been humiliated enough by appearing desperate for a man to marry me who now  admits he had his own agenda. I urge viewers to stay tuned because the truth  will come to light. I am moving on from this situation and hope he can as well  with respect and dignity going forward. I have heard the fans and my friends  loud and clear … I can do better than Walter, and I will http://www.divawhispers.com/?p=38328.

The former Miss USA urges viewers to stay tuned “because the truth will come to light”. Unfortunately for her, it seems like her truth is shining bright all through the city of Atlanta, exposing her not so to “put together” self image. It definitely feels like the public is believing Walters truth over Kenya’s.