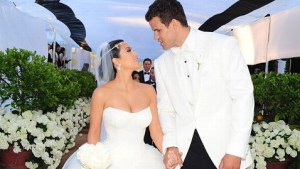 Things seem to be looking up for the always camera ready Kim Kardashian. She’s expecting a baby with rapper boyfriend Kanya West, the new season of her reality show “Kim and Kourtney Take Miami” recently premiered and she and her family’s many Kardashian brands appear to be taking off without a hitch. Life seems to be going pretty good for the E! star. Except for, oh yeah, that pesky husband she can’t seem to get rid off.

We’ve given you the details about Kim K’s ordeal with the two men in her life, Kanye and Kris (notice how both names start with a ‘K’ like  almost everything else associated with the Kardashians. Funny right?). Kim filed for divorce after a measly 72 days but is still technically married to Kris and will continue to be until the results of their divorce trail unfold in July.

Although Kim has seemingly moved on with a new beau and pending baby, Kris is not letting her off the hook so easily. According to RadarOnline, Humphries allegedly turned down 10 million dollars from Kim in exchange for not seeking to annul their marriage on  the grounds of fraud.

As reported by RadarOnline:

Kris flatly rejected the offer because it has never been about money for him, the source says. He wants to be able to marry in a church again, with a clear conscience, when he finds someone special. Kris is deeply religious and he believes that the only way he can do that is if his marriage to Kim is annulled.

There’s been speculation from the public and Kris that the marriage was a hoax for TV. The televised wedding between the two reportedly made millions as it debuted on the E! Network, in addition to the other publicity their relationship received. Plus, he’s not doing too bad for himself either being an NBA star and all. Kim has insisted that her feelings were legit from the “get-go” but as it can be determined from Kris’ stance on the matter, he isn’t buying it. Who can blame him? Who would think otherwise after their wife “renigs” her vows  after 72 days of marriage?