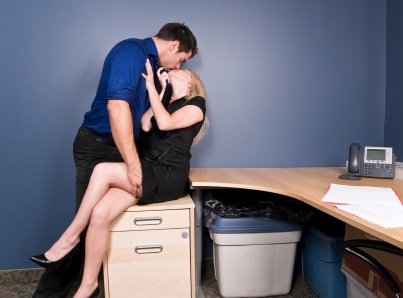 We are now at the half way point for Valentine’s Day. In exactly seven days, loved ones will be toting a of parade of red, white and pink balloons, chocolate boxes and teddy bears that will invade our workplace, cars and kitchen tables. On the other hand, those of you who may be building up the bitterness until the big day, are probably less enthused about the whole thing. Don’t lose hope yet. If you’re still without a Valentine, try scoping the office. Now it’s not conventional to mix business with pleasure, but a recent survey proves that people are doing it more and more anyway.

We all know who the partners in crime , the way too friendly pair, and the two in the copy room every Tuesday  in the office are. So while office romances are usually openly frowned upon, in the dark, many count that as void. Online salary database Payscale.com, conducted a survey to track down exactly who and where people were more prone to find love or a fling in the office.

According to Yahoo! Shine, the results from Payscale’s survey concluded that the food service industry is big on dating co-workers among other things. “Cooks made the list three times–they are most likely to fall in love at work, hook up with a coworker for a fling, and also be on the hunt for a relationship with an office mate”. They also reported that the top three places to find love at work are Chattanooga, TN( number one place to find husband/wife), Des Moines, IA, and Toledo, OH. Look out potential Valentines!

Other results from the survey included what type of workers stay for “overtime” with the boss, date the boss, and who least likely approves of such actions. Shine reported that “ten percent of workers in the oil, mining, and gas industry all admit to having an out-of-office relationship with their boss. Office managers and administrative assistants also admit to “working” after hours with their supervisors” (Atlanta, GA was number 8 on who is most likely to date their boss and Augusta, GA was number four on places most likely to disapprove of the behavior).

You’re not out of luck yet. There’s still a week’s time to join in the festivities if you’re still pining for a Valentine. Traditionally, people shouldn’t be looking for love in the workplace but it makes perfect sense to conjure an attraction to someone you see and work with everyday. In reality, finding love in the workplace is probably the most unconventional but at the same time it’s the most realistic place to stumble upon it.