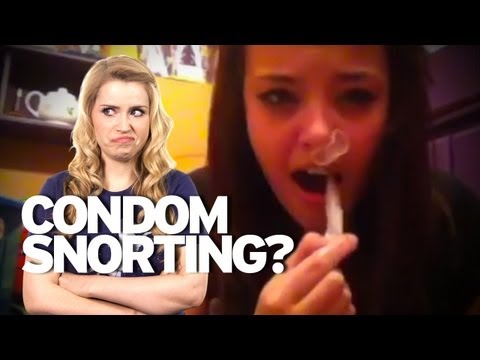 *WARNING* Video may be too graphic for some viewers.

“I believe the children are our future, teach them well and let them lead the way”. If these kids and others like them are the future then I’m ready to clock out now. When you first look at this video, you may think “oh, they’re just being kids having fun”, but I get something more prevalent out of it, peer pressure and how it affects the people that fall prey to it. Sure we can train them up so they won’t depart from it once they’re older but let’s face it, while parents should be the greatest influence among their kids, keep in mind that they are not the only ones. Speaking of parents, if you listen to the tone of the narrator, it sounds like this could be a parent recording this foolishness.  I hope I’m wrong about that assumption but if not, then “ma’am, you ridiculous for doing this”.

A lot of times I’ll hear stories of children who start to act out or do things they wouldn’t normally do and it’s not necessarily because of something going on in their home life or with their parents. Lil Darrell might be pressuring Keisha to “get with him” at lunch. Johnny might be passing a blunt to a reluctant Jessica behind the bleachers or Kevin might be getting teased by his boys for not drinking at Stacy’s party.

But back to this video with the possible negligent parent. I’m utterly confused as to why someone would want to snort a condom. First off, as you can see from the video, teens or anyone who partakes in this could risk choking, serious sinus infections and even trauma to the area or from the experience. Second, condoms contain chemicals that are not meant to be ingested. According to The Industry, condoms contain “Petroleum, which suffocates the skin, outer skin as well as internal skin”, “toxic powders and talc” are placed into certain brands (probably the cheap ones) and the “toxic chemical ethylene dibromide when placed in condoms causes abnormal redness and blisters to occur when it comes into contact with human skin. The medical diagnosis is genital herpes”. Makes you think twice about doing the condom challenge now, doesn’t it.

Now I don’t know what possessed these girls to attempt the condom challenge (hopefully it wasn’t the possible parent heard in the video) but it’s likely that they heard about it in school and joined the bandwagon of other YouTube sensations. Maybe they were dared by friends, who knows. There’s nothing wrong with a good, wholesome fun dare every now and again but when a dare becomes persistent, it turns into pressure. I wanted to point this video out to my readers because it’s important that we don’t underestimate the outcome of things that start off small like peer pressure. A bunch of little problems could turn into a big catastrophe. Think about it this way. If your child is being pressured to do something they don’t really want to do, and they follow through with it, they could become depressed because they went against their gut and are probably disappointed in themselves and what their parents might think if they ever found out. As I’ve informed you in previous posts, one of the side-effects of depression is suicide. See the pattern? Peer pressure could lead to depression, depression could lead to suicide. And to think, it all started with peer pressure.

If you’re a parent reading this post or are a teen yourself, ask yourself or child:

If you or your child has answered yes to any of these questions, and they can’t give you a reason other than “I don’t don’t know” as to why they did it, they may have or be suffering from peer pressure. Keep in mind that 74.3 percent of high school kids have already tried alcohol and 50 percent of teens feel pressured to have sex, so if they look or sound like they could be lying or are avoiding the questions, they’ve probably already fallen prey.

I hope this information was helpful. Remember to talk to your kids. You’re their first influence so hopefully what you’ve instilled will override anything contrary. But if talking is not your strong point or your relationship with your kids is strained, it’s never to late to start a conversation. If you feel the problem is already over your head, then seek professional help in the form of counseling or psychotherapy immediately.