Two men have been arrested in connection with the murder of Malcolm Shabazz, the grandson of civil rights-era leader Malcolm X who died Thursday in Mexico City. The suspects, who work at a bar Shabazz visited, face charges of homicide and robbery.  According to recent media reports Malcolm Shabazz was beaten to death in Mexico City, Mexico.  He died from the injuries on the way to the hospital.  The robbers attempted to Rob him and he resisted so they beat him.   Malcolm Shabazz was the son of the second daughter of Malcolm X.  You may remember him in the news when he was a child.  He was arrested and plead guilty to arson in June of 1997.  He was about 13 years old at the time of the incident. He set his grandmother Betty Shabazz apartment on fire while she was sleep.  She suffered from extreme burns and after 3 weeks of staying in the intensive care unit in a hospital in Yonkers, NY she died at the age of 63.  Malcolm Shabazz was convicted and sentenced to 18 mos in a Juvenile Detention Center.  Throughout his life he would continue to have legal issues.  Convictions ranging from destruction of property to robbery.

Terrie M. Williams, a Mount Vernon native who now runs the Terrie Williams Agency in New York City, has worked closely with the Shabazz family and confirmed the man’s death via Twitter. 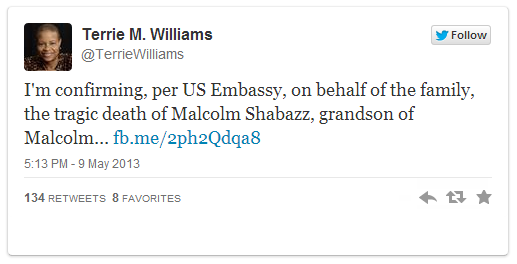 According to his blog, which was last updated on May 2, Shabazz had been traveling the United States and elsewhere, speaking about the “struggles that confront this generation.” According to the site, which features a number of personal photographs, Shabazz also was working on a book.

Shabazz, also according to his blog, had not completely steered clear of law enforcement, even in his later years. As recently as February, he had run-ins with an FBI counter-terrorism unit, which, he claimed, had been investigating him for some time.

Malcolm felt he was under investigation by the FBI.  He felt like he was being harassed as he stated in a recent blog post on his blog site http://malcolmshabazz.blogspot.com/ Click to read more as he goes into details. 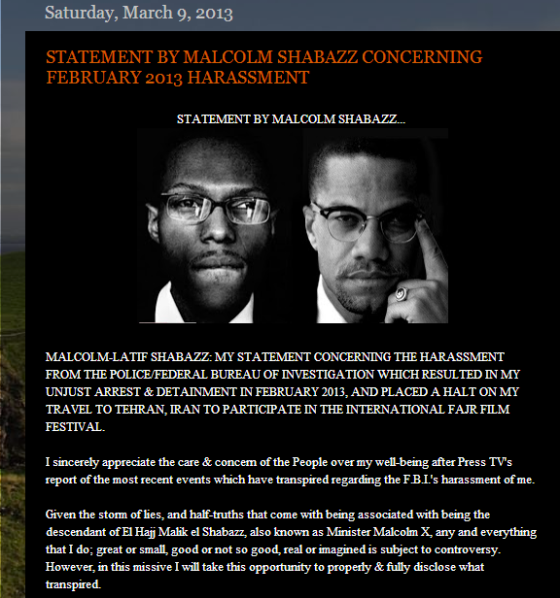