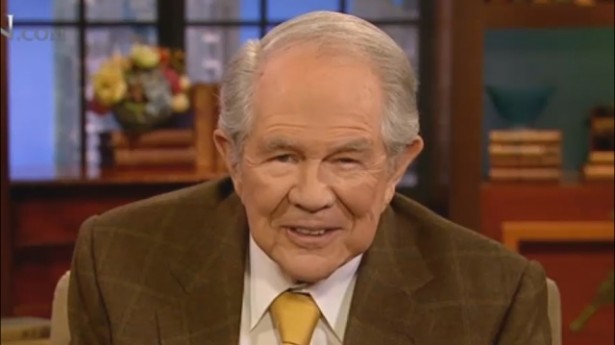 Eighty-three year old, longtime “700 Club” television host, Pat Robertson is officially off his rocker. The veteran TV host has received heavy criticism for his comments in the past on controversial topics but his latest insight on cheating has thrown us over the moon. Robertson basically told a woman that inquired to the show on how to forgive her cheating spouse that “men have a tendency to wander” and to focus on the things he does right like being nice to the kids and providing you with food and shelter…wait, WHAT?

Yes, after Pat made this absurd statement, I was floored. First off, he’s pretty much telling women and wives to simply accept the fact that men cheat and to just get over it, like he just forgot to get you flowers for Valentine’s day or something. Yes, it’s been proven that men have greater numbers in the infidelity department than women but cheating is not something that just comes natural and should be expected upon entering a relationship.  Let marriage be held in honor among all, and let the marriage bed be undefiled, for God will judge the sexually immoral and adulterous (Hebrews 13:4). There is such a thing as self control and I know the Lord to be a keeper and if you’re serious about keeping your family together and have committed that thing unto him, he’ll keep you and that rowdiness down below.

Second, I have a problem with the nonchalant way Pat addressed the issue of infidelity (sounds like he may have been a bit of a rolling stone back in the day) and how he sort of indirectly blamed the woman for the man committing adultery by saying a “woman should make a home so wonderful that he’s doesn’t want to wander”. Now you’re just adding fuel to the fire Pat. First you imply that it’s normal for men to “wander” then you imply that it’s the woman’s job to ensure that it doesn’t happen? It may be time to retire Pat Robertson.

Pat, the 700 Club is a respected show of believers where viewers call in for advice, words of encouragement and prayer and you basically tell the world on national TV that you condone cheating?  I’m sure the woman that wrote to the show about her husband’s affair wasn’t expecting to hear you tell her” to focus on the good things”, “touch his face” to reconnect and ” to thank God that you’re in a marriage that’s together and you live in America where good things are happening”. So people should give thanks for marriages filled with deceit and wandering spouses? But as long as your still together it’s fine, right?

Cheating is not okay and should not be taken lightly nor should it be expected or accepted by anyone. As a Christian based show, Robertson’s answer should have been Word based and the Word clearly says that “Thou shall not commit adultery” (Exodus 20:14) not that “men have a tendency to wander” so it’s okay if they do. I was really disappointed that Pat gave excuses as to why men cheat instead of simply saying it was wrong and coaching the inquiring wife on how to properly forgive and move on.

Pat, I’m concerned. If this is the caliber of advice you’re adhering to these days, I may have to start a petition to have you taken off the air.