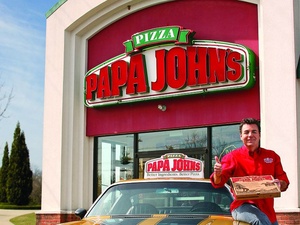 A little over a year ago Sanford, Florida was placed on the map after the killing of Trayvon Martin.   The city was labeled a racist hick town and once again it has proven its nickname to be true.  A customer of Papa John’s posted a YouTube video exposing the pizza delivery guy who left an accidental voice mail  of him using racial slurs.  The customer in the video displays the cost of the pizza and explains that he gave the delivery guy more than a 20% tip.  On the voice mail the delivery guy calls the customer a nigger several times.  He even made a song of the word nigger and you can hear his co-workers in the background laughing along with him.  The customer ‘s video has now gone viral and has captured the attention of the news media and an apology from the CEO of Papa John.

Listen to the voicemail below:

Read the CEO’s response and apology below: 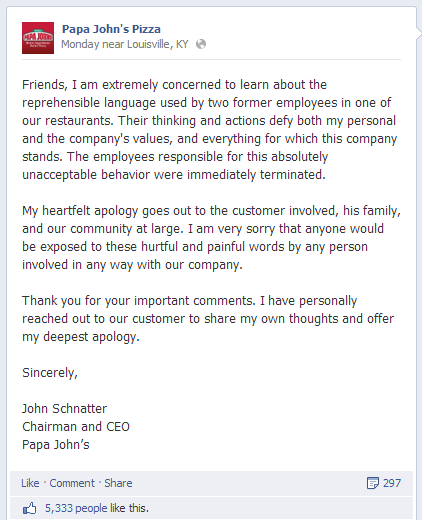 After reading the response do you feel his apology was sincere or just a great response written by his team of public relations specialist in an attempt to play damage control.  Schnatter personally reached out to the customer and offered his deepest apology.  The incident  has definitely placed this small town back in the news media and not in a good light.  Are you surprised that this is still an issue in our communities? How does this affect your views on the Trayvon Martin Murder Case? Does this incident change them or further confirms what you already thought?

This is definitely an issue that needs to be addressed and brought to light.  America portrays itself as a land of equality and justice for all.  But racism and inequality still exist in the unconscious  of some of our citizens minds.  As a fellow African American I am appalled that this ignorance still exist but not at all surprised.  This only validates that we as a country still must continue to educate one another and continue to fight for equality for future generations to come.