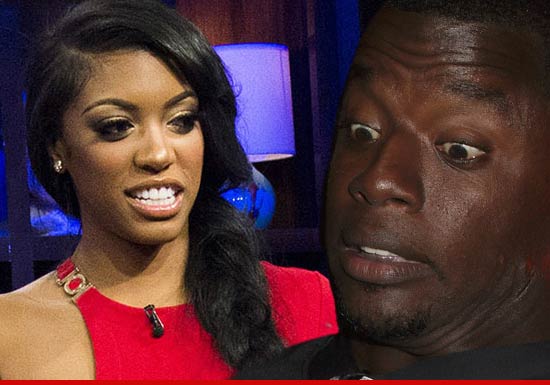 Kordell Stewart seems to be turning out to be  somewhat of a trouble maker. We all that divorces can be brutal so I guess it shouldn’t be too surprising that Kordell is pretty much snatching every piece of the luxurious lifestyle  he gave Porsha Stewart during their marriage back.

Even though Kordell and Porsha are getting a divorce, they were still staying in the same house (awkward). It seems like Kordell has taken matters into his own hands and forcing her out by way of changing the locks. According to NewsOne, Kordell said Porsha abandoned their home last month and therefore he changed the locks oh but he did give her a courtesy text to let her know. Shady.

Newsone also reported that Kordell believes that Porsha is well able to fend for herself since she’s a celebrity now making money off of appearances, endorsements and TV shows. I don’t know about that. Sure she’s made some money from RHOA but she’s no (as NeNe would say) rich b**** without Kordell. Word on the street is that she’s back home with her mom likie a kid moving back home from college!

I don’t think that couples ending their relationship should continuing co-habitating but I do believe Kordell could have gone about this another way. In regards to her financial situation Kordell said that she should be able to provide shelter for herseld but if not it’s a“result of her own financial negligence” . Sort of true. I believe in saving for a rainy day and putting some away (I’m sure she could have stashed some of her allowances from Kordell). I mean she was soley dependent on him throughout their marriage so it’s not that surprising that she may be “strugglin” in her finances right now.

Is this the same guy that supposedly wanted to get his lady love back? If it is, he sure does have a funny way of showing it!

What do my readers think? Is Kordell wrong for kicking Porsha to the curb, hard?