Wearing dark sunglasses to hide the black eyes, being turtle neck clad to cover the marks on her neck or making up stories of how she fell and got the various bruises. One in four women have experienced domestic abuse from a spouse or boyfriend, according to futureswithoutviolence.org. Domestic violence isn’t exclusive to women, but it is more prevalent. 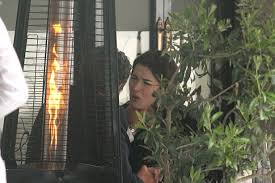 In recent news, celebrity chef Nigella Lawson was photographed [allegedly] being choked by her husband Charles Saatchi. The photo captures what appears to be a distressed Lawson sitting at a dining table with the hand of Saatchi firmly around her neck. Saatchi attempted to explain his side of the story to the Evening Standard. “About a week ago, we were sitting outside a restaurant having an intense debate about the children, and I held Nigella’s neck repeatedly while attempting to emphasize my point. There was no grip, it was a playful tiff,” he said. “The pictures are horrific but give a far more drastic and violent impression of what took place… Nigella’s tears were because we both hate arguing, not because she had been hurt.”

Lawson nor her representatives have commented on the photos and as a result, Saatchi has filed for divorce. “I am disappointed that she (Nigella) was advised to make no public comment to explain that I abhor violence of any kind against women, and have never abused her physically in any way,” us magazine is reporting.

I don’t know the entire story, but if Saatchi had been abusing Lawson, he is giving her a way out, which is something that is usually difficult for the abused. Domestic abuse is usually centered on one person attempting to control the other.

There are agencies designed to assist in providing help to victims. Remember, there is always a way out. It’s extremely important to recognize the warning signs and leave a relationship before it becomes abusive. Check out my book “Am I in A Bad Relationship?”