Annoying neighbors can be hard to deal with at times but we all manage to endure those nuisances and get on with our lives. Maybe your neighbor is nosey and stops you at the mailbox every evening to discuss your day. Maybe your neighbor’s dog relieves himself in your yard or maybe you have teenagers next door who party like it’s 1999 every other weekend when you have to get up bright and early for work Monday morning. See what I mean? Annoying but certainly tolerable; nothing that causes for excessive, mean-spirited retaliation right?

One angry neighbor in Canada went beyond necessary measures to notify her neighbor of her “fed up” attitude towards her 13 year old autistic son, Max. I must warn my readers that the contents of the letter are extremely insensitive, derogatory, hateful and ignorant which phrases mentioning that “they should take whatever non retarded body parts he possesses and donate them to science” and “do the right thing and move or euthanize him”!

According to Newsone, Max was diagnosed with Autism at age two and spends much of his time at his grandmother’s home; where the anonymous angry neighbor resides. Clearly the writer of the letter is unlearned  when it comes to mental illness/disorders and personally I see her as heartless to write such a hate filled letter about a helpless child. There are different forms of Autism; from high functioning autistic individuals to those who are unable to communicate through much speech or function poorly in society. The severity of Max’s Autism was not specified but it’s possible that its on the more impaired side judging by the neighbor also writing that the noises he makes while playing outside are “dreadful”. 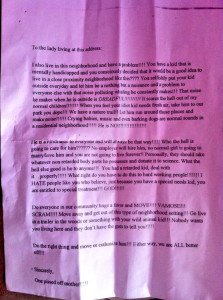 Newsone reported that the incident is being investigated by authorities.

Sounds charge worthy to me. Read the letter for yourselves. Does this author deserve to be charged with something?