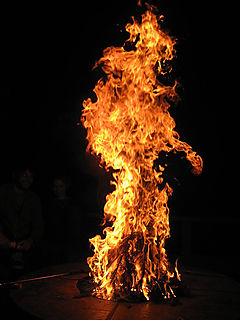 They say what goes around comes around. The Bible says you reap what you sow and well we all know Karma’s a b****. Sexual abuse is no laughing matter and should never be taken lightly but if this isn’t the definition of payback, I don’t know what is. Although the incident happened overseas  in India, it could have very well been a young woman in the states or up even up the street from you.

According to The Times of India, a 25 year old woman was allegedly raped  under a police station by her now deceased, yes he died due to his burn injuries, 38 year old rapist. He held her at knife- point but she got her revenge.

As reported by The Times of India:

According to his dying declaration, the woman — who he raped — asked him to visit her house for negotiating an out of court settlement in the rape case on Thursday evening. When Raju reached her house, the victim, with the help of her brothers, doused him in kerosene and set him on fire.

The alleged rapist was taken to the hospital by onlookers but he didn’t make. Considering that this man may have been a rapist, some may say he deserved this type of “eye for an eye” retaliation but it didn’t come without another cost for the rape victim. It was reported that she and her brothers were charged with murder.

Let’s bring this home shall we? How do you think something like this would play out in the U.S.? There are so many people that suffer in silence after being sexually abused and many never even speak of it yet alone go after their attacker. Do you see it as a good thing to have this type of hands on approach for a wrong doing or would you prefer the law to handle it? I should also mention that the Times of India reported that the supposed rapist was released from jail on bond, so I take it that that didn’t go over too well with the victim.