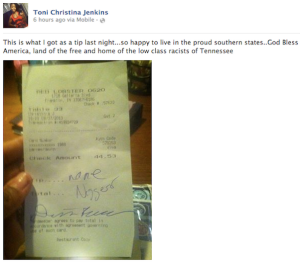 Nashville, Tennessee resident Toni Jenkins works as a waitress at Red Lobster and told The Daily Mail that she provided good service. She said that she introduced herself and was polite. She said that she even offered dessert to the 20 something year old couple she had just served. When she looked down at the receipt, the word “none” was written in the tip section. What was more upsetting is that the word “nigger” was written by the total.

According to dailydot.com, Jenkins showed the racist receipt to her manager who assured Jenkins that she had done nothing wrong. Jenkins went home and posted a photo of the receipt to her personal Facebook page. The photo immediately started circulating and caught a lot of attention. People analyzed the ink and handwriting and questioned the authenticity of the receipt. As a result of the controversy, Jenkins was suspended with full pay.

Check out the receipt and look closely. Do you think the handwriting matches? Is Jenkins just trying to get attention? Do you think Red Lobster was fair in suspending her? At this time, these are all the details we have, but I am curious to see how this story unfolds. I think that if the receipt is authentic then Jenkins should have posted it. People are often afraid of standing up for what is right. I think this was a bold move and a necessary one. Racism is never okay and it’s never okay to disrespect those who work in a service industry. Jenkins is a 19 year old college student studying to become a nurse. She’s just trying to make money for tuition, books, or whatever… you remember how it was to be a struggling college student. I think Red Lobster owes her an apology.