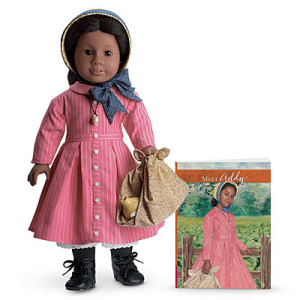 You browse your daughter’s Christmas list for the items she requested from Santa. Pink bicycle with no training wheels (because she’s a big girl now), a Hello Kitty charm bracelet she saw on TV and slave doll, Addy. Wait, what? You reread that last one hoping that you misread or misinterpreted what she had written, but you hadn’t. In plain black and white is written: SLAVE DOLL ADDY. You go to your computer and google the doll hoping to see some satirical website or learn that it’s some sort of cruel joke, but nope. Addy (the slave doll) is a legitimate toy.

She is a part of the American Girl historic collection series and according to AmericanGirl.com, Addy is a courageous slave living with her family on a plantation in 1864 during the Civil War. She overhears her parents plotting an escape to Philadelphia but her brother and father are sold before they can put the plan into action. Now Addy, her mother and baby sister disguise themselves and flee. They make it to Philadelphia and freedom only to find that there is still segregation, but now it’s by socioeconomic standards. Her mother gets a job as a seamstress and Addy starts school and learns to read and write. Her story is told by the author and creator of the series, Connie Porter.

After I looked to see if Porter was black, which she is, I tried to look a little deeper. Oh don’t give me that, you wanted to know her race too! Seriously though, this is our history. There is no denying that, but I’m still having a hard time fathoming this as a toy that I would give my child. Our heritage is rich in culture and should be shared and celebrated. Even the not so glamorous parts of our history need to be taught. Now here is where I am conflicted, is this a history lesson being brought down to a child’s level of understanding or is this making light of the terrible lives many of our ancestors lived?

What do you think? Will this be under your daughter tree when she wakes on Christmas morning?