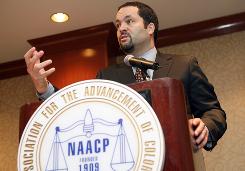 I am both shocked and appalled  by your statement that was released last Tuesday.  After all, this event happened 24 years ago.  Did you know this fact? Probably not!  Since when does an organization such as the NAACP release such strong and career devastating remarks about one of its own without completing at least a preliminary investigation?  Considering Ms. Shirley Sherrod’s position, both a conversation with her and a thorough video tape analysis should have been done before release of any statement. As for Breitbart (the tape production company) quietly sitting in the cut and watching us fight among ourselves is inexcusable.  Please investigate, especially before releasing a statement calling for a person’s resignation.  The NAACP is a laughing stock for this blunder. Yes, it was a life-changing blunder for a pioneer in her field. I am angry and upset with you personally; remember that anyone’s enemy can use the internet to damage someone’s reputation.

It is my understanding that you did not even consider the timing of the release of Sherrod’s video. Question: didn’t you find it a little suspect that such a video would surface within hours of your denouncement of  racism and the “Tea Party”? I don’t! This was all well orchestrated and thought out by everybody except you and your advisors.  You have been bamboozled by the enemy! Now that there is a little dust settling, how exactly do YOU feel? Hopefully ashamed. The apologies will never repair the  “almost” damage done to this lady’s reputation. I am glad that she is a strong Black woman.

This is my concern: many of us cannot find the relevance of the NAACP at this time. Your actions further validate this concern. My generation has questioned the very existence of this former vital voice in our communities.  Lately, we just see a lot of inward fighting between the SCLC, and now, your organization.

Yes, I would consider the blunder on Tuesday as inward fighting. After all, Ms. Sherrod was a guest speaker. I am sure that whatever committee you had planning this activity checked its list once and even twice. Here is the thing: would the NAACP, who is adamantly opposed to any type of social injustice, invite a speaker who was against its mission since its inception? I don’t think so. I will tell you this much: you guys are the water cooler jokes for many non-African-Americans.

In closing, I have one other issue. Not only was Ms. Sherrod the first African-American in this Georgia position, but she also was the first woman. I feel badly for you; the next time I get an invite to join or support the NAACP, guess what will pop into my mind first?  Did not the organization do to Ms. Sherrod  what is done to many of us daily? Is this called reverse racism, or  just buffoonery? At this juncture I am not sure this organization is relevant for the further advancement of Colored people. However, I question if its leadership is actually fossil.

P.S. Ms. Sherrod: if you decide to move forward in a lawsuit against Breitbart, let us know so we can contribute to your legal fund!

Do you feel like Mr. Jealous’ actions were inappropriate? Is his apology enough or should we call for his resignation? Let me hear from you. This is a topic that needs to be discussed, and I promise to forward this post and the comments to the NAACP.  Be respectful, but say what is really on your mind.