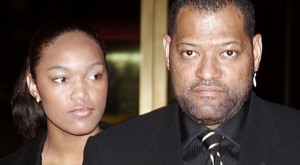 Despite father Laurence’s efforts to halt the snowballing mess of her “acting” career (including him and his friends’ attempt to purchase all the video footage from her films for a whopping $1M), Montana maintains that she didn’t enter the industry to bring shame to her family or her father’s name. Furthermore, not all members of the Fishburne clan are upset by her choice…her mother actually offered her support!

But looking at Montana, as she is a child who was victimized by divorce, are the parents to blame, or is this her own doing? Did the result of her parents’ divorce cause her to fall down the “rabbit hole” into the adult film “Wonderland”? What underlying catalyst could have influenced her behavior? Is there a deliberate desire to be rebellious, or is there a subconscious effect taking place?

“My dad’s very upset,” says Montana. “I heard he’s mad at me but I haven’t spoken to him yet. I feel pretty confident that I can work things out with him.”

Good luck with that, Chippie D…I’m sure once Daddy gets a hold you, it will be a whole different type of punishment…one you won’t enjoy.

What do you think of Montana Fishburne’s want to be an adult film actress? Would you support her for following her dreams or not? Let’s start a discussion on this to see what our readers think!

At AskDrO.com we always encourage our readers to stay well and healthy in all aspects. Take the Dr. Owens Mental Health Prescreen Test to check your mental health status!