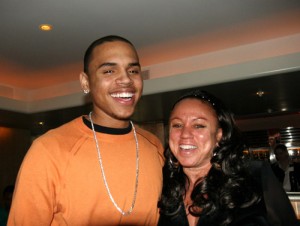 Chris Brown and his Mom Joyce-Hawkins

Joyce Hawkins tweeted yesterday: “Michael Jackson died so that Chris Brown could live!” I don’t know whether to call this a delusional system, florid psychosis or Folie à deux (A Shared Delusional System). Many may just call it wishful thinking on her part. After doing a brief analysis of the statement, I can now sort of understand where some of Chris’ vulnerabilities may come from…his mother. The Oedipal Conflict may not yet be resolved in their  relationship (Chris and MomBreezy). I am NOT sure why this statement would come out of the box interestingly, several days after Michael Jackson’s birth date celebration.  Is MomBreezy depressed? Or could this just be another PR stunt using twitter.com.  If so, then she was successful with this one; yes, Michael Jackson is dead and no matter what many may attempt to infer, Chris Brown is NO Michael Jackson. Michael did have a few faults, but they are a little different than those one can identify in Mr. Brown.  No, I don’t have a vendetta against this young entertainer, but I find it interesting that many try to parallel him to M.J.  Michael’s negative attention usually was not self-sought out, however Chris tends to set himself up for recurring ridicule in the media.  However,  today I will not hold Chris accountable for his mother’s tweet but her delusional thinking may require a clinical intervention if it continues.   Some people were insulted and it was even call blasphemous by others.  I will not go that far, but Mom Breezy YOU ARE WAY OFF! (This type of thinking may be considered delusional by some in the entertainment field. As an outsider, I will hold off on my opinions for now.) You may want to help your son process through some of his “anger issues” and not put him too high on any pedestal  just yet.  He may rise again, but there is still a staunch from his Rihanna episode, or did you conveniently forget about that fight?  I have to give credit where credit is due, there just will never be another artist like Michael Jackson – The King of POP! Please don’t kill him for a wife/girlfriend  beater.

Do you believe that Michael Jackson died so that Chris Brown could live? Is Chris Brown any where near the entertainer that Michael Jackson was in your opinion? Should Chris’ mom be censored from tweeting? Let me hear from you on this issue…
We at AskDrO.com are firm believers in mental health. If you may be feeling depressed, angry, or have trouble coping with issues, take the Dr. Owens Mental Health Prescreen Assessment and check your mental status!