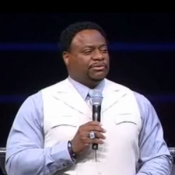 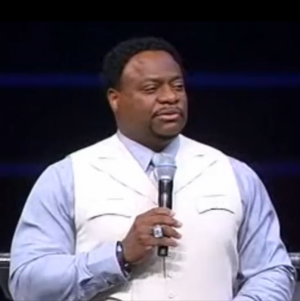 The Bishop Preaches a Fiery Sermon on Easter Sunday

We told you that the settlement in the Bishop Eddie Long allegations were near and a judge confirmed the story.

After three months of mediation, the case is within “field goal range” of being settled, said Judge Johnny Panos to reporters, according to The Atlanta Journal-Constitution. Panos talked to the media with the aim of clearing misinformation being reported about the case.

Since February, the attorneys of both sides have been meeting with mediator Gino Brogden, a former Fulton County Superior Court judge in Georgia, to hammer out a compromise.

Last fall, four young men filed lawsuits against Long, the pastor of the 25,000-member New Birth Missionary Church in Lithonia Ga., accusing him of abusing his spiritual authority to lure them into sexual relationships.

The plaintiffs, who were all former members of Long’s church, alleged that the preacher would take them on overnight trips, give them expensive gifts and would engage in intimate sexual acts with them. Two of the men came forward first to file lawsuits, followed by the other two men after news broke about the lawsuits. Besides Long, New Birth Missionary Baptist Church and LongFellows Youth Academy are also named defendants.

Although the BISHOP has continually denied the allegations it’s amazing to me that he’s so quick to settle this lawsuit….and is trying to keep it from going to trial. I won’t forget the hurt in his young accusers eyes as he told his story. As always…I’ll keep you updated.

He also seemed to think that he’s won his BATTLE…as indicted in his Easter Sunday Sermon.

“You ain’t messin’ with me. I shall rise again and I ain’t going through this…”

*Video has since been made private by the owner.

What do you think readers, is the Bishop feeling himself?