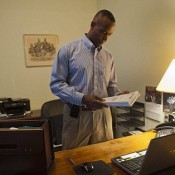 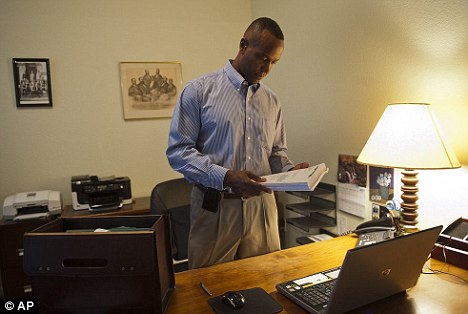 A man sued Sears after one of his supervisors repeatedly used racial slurs against him.

Medro Johnson, who is black, filed a lawsuit against the company after his complaints to supervisors went unanswered.

Paul St. Hilaire approached Mr. Johnson at a company barbecue and said, “Medro calls me Masta, in slave dialect,” before walking off laughing.

Mr. Johnson, 49,  was humiliated because he was standing with his wife, son and daughter.

‘I’m going to get you and you’re not going to see it coming.’

But apparently St. Hilaire was the one who got…got.

Johnson complained to supervisors about the threat and the ‘Masta’ comment from two months earlier. The lawsuit notes that nothing came of the complaint.

In another occasion, St. Hilaire was said to have repeatedly ‘bashed’ Mr. Johnson with his shoulder in December 2008.

He called him a ‘n***er’ and bashed him again so that coffee spilled down his shirt. Mr. Johnson retaliated by hitting the salesman with the back of his hand, an action which got Johnson sacked.

There were many witnesses to the encounter at a company training session. St Hilaire faced no disciplinary action.

Christopher Whelan, Johnson’s attorney, told the Sacramento Bee: ‘The message for Sears is that it just can’t ignore the law, no matter how much money the harasser earns for them. They subjected Medro to very serious risks and fear of retaliation.

‘And they stepped over the line with subsequent acts by management to avoid being exposed for failing to follow the law.’

Sears plans to appeal the decision.

Attorneys for Sears Home Improvement, Sears Holdings Corp  and St. Hilaire referred questions to a company spokesman, who said: ‘We are very disappointed in the verdict, and we are exploring all of our post-trial options, including appeal. We have no further comment at this time.’

St. Hilaire is no longer with the company.

..and they say racism is dead.

Have you ever been discriminated against on the job? How did you handle the situation?