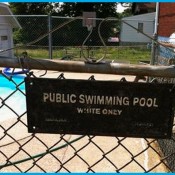 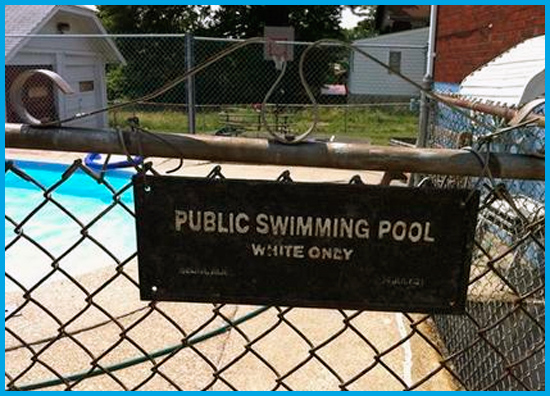 Jamie Hein owns a private housing complex with a swimming pool and decided to post the sign which reads: “Public Swimming Pool, White Only.”

The segregation sign is dated in 1931 and is from Alabama.

“I’m not a bad person,” said Hein. “I don’t have any problem with race at all. It’s a historical sign.”

She admits to collecting antiques and was given the sign as a gift. She maintains that she has the right to post the sign since it’s on her private property.

Michael Gunn, 40, a tenant in one of Hein’s properties filed a discrimination charge with the Ohio Civil Rights Commission.

“We invited my daughter, who is African-American, to visit and swim in the pool for the Memorial Day weekend,” Gunn wrote in his complaint. “The owner, Jamie Hein, accused my daughter of making the pool ‘cloudy’ because she used chemicals in her hair. Days later, she posted a sign on the gate to the pool which reads, ‘Public Swimming Pool, White Only.’”

Gunn said the family previously “had unrestricted access to the pool area,”

Hein maintains that everyone has to ask to use her pool; including her own father.

The commission will meet to come to a final decision on Jan. 12, according to Brandi Martin, a spokeswoman for the Ohio Civil Rights Commission.

Gunn has since moved out of the property.