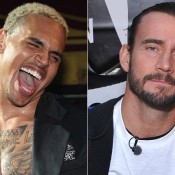 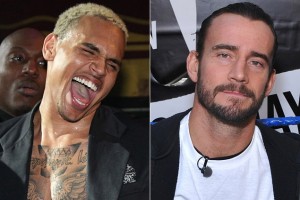 News FLASH!! Chris Brown is back in the press.  After taking a short hiatus,  his name has resurfaced in the media again.  Is this just another singer/rapper publicity stunt to increase album sells?  Well here is the scoop,  according to TMZ , Punk M randomly tweeted Brown saying that he wants to “curb stomp” Brown at an upcoming WWE event.  He stated,  ” I want Chris to fight somebody that can defend themselves.” We are  all curious to know where did this tweet come from? Was this just a playful publicity tweet that fueled into something more serious?…Well that’s exactly what happen moments later when C. Brown caught wind of the tweet.  He later tweeted back saying “@CMpunk needs more followers. He’s such a leader! Not to mention the (ste)roids he’s on that has made it utterly impossible for him pleasure a women.” Brown later added that he has never met Punk and had no clue where that negative tweet came from that Punk M sent.

Let’s get down to the source of the REAL issue.  Chris apparently hasn’t learned from his last media downfall with Rhianna.  Either he needs to hire a better publicist to keep his name out of the negative tabloids or just stop finding his way into trouble. Chris you don’t need to respond to anything and everybody.  Sometimes you just have to “Let It Go!”

It appears that the negative halo just continues to follow Chris Brown.  However, it seemingly does not affect his record sales. LOL   Also, no matter how harsh the criticism, feedback or intervention,  Chris never  gets “a correctional emotional experience”.  It is my hope that one day he will be free of his deep emotional pain.