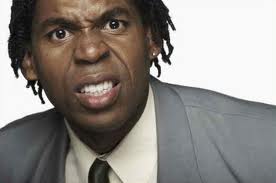 It has been brought to my attention that several of my blog posts and my YouTube videos  can actually illicit the emotion of “anger.” Whether intentionally or non-intentionally,  the feelings invoked in an individual person after or during reading any one of my post,are simply individualized. I had to ask myself the following questions;   (1)AM I an angry blogger? (2)Do I have my own issues with racism? (3)Am I a Black racist? All of these questions ran across my mind. Let me answer a few of these questions for you in this post.

#1.  I am NOT an angry blogger. I do at times,write with passion that can be misconscrued as “anger.”  However, I have chosen to only write about things that now raise  readers to another level of  consciousness.  I have attempted to write about the “garden variety” depression but I get no response, at all,  from my readers.  So I have to write what you guys what to hear and that sometimes can be a controversal topic..

#2.  Do I have issues and problems with racism?  Yes is the only answer I have for this question.  It seems as if things are really getting worse in America. I can NOT explain the feelings that I personally had with the Trayvon Martin case. I believe that I may have been enraged. Is this possible?

#3. I am NOT a Black racist. Personally I don’t feel like there is any such thing. What I see is a majority race continuously trying to suppress a minority race.  We still only make-up 13% of the American population. Enough Said!

Finally just take a quick peak at the video up top again if you need the provocation intended in this post.

Conclusions about why I (Dr.O) that  think Black people are overall still ANGRY:

How do you feel about what you are seeing in the culture?  Is the majority race really becoming less culturally sensitive than they were in the seventies and eighties? Have you had to deal with any new incidents of racism and white supremacy in teh past several months?  (inappropriate police stops, job racism, etc.) Are you feeling the Barack EFFECT?

I would like to hear what you think.  Don’t be bashful.  We have got to began speaking out more about the issues surrounding race, culture and gender bias.  The time has come for us to fight back. We have to fight with knowledge and wit this battle.  We must demand that out young people become educated in an effort to deal with what is coming around the corner.

I need you to post your comments on this forum.