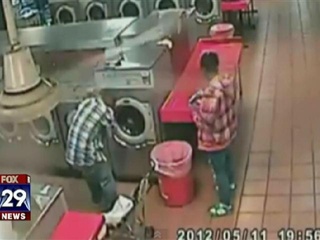 Okay.. this is very outrageous to me, but…

A father evidently is bored with waiting on their clothing to finish washing, so he finds time to play a prank on his 1-year old baby.  The man picks up his child and places him in the washing machine.  After shutting the door, the washing machine turns on begins to fill up with water because, coincidentally, there was change already in the dispenser!  Along with other high-tech washers and dryers, the door locks so customers can’t overload it.  By then, the mother is panicking and pulling at the door trying to get her baby out.

The father runs off to retrieve the employee on duty so that he could help.  By the time the employee comes back the child has been in the washer turning for about 30 seconds.  The employee reaches in the back panel and shuts the power off to the machine.  But for some reason the door doesn’t immediately open.  They have to sort of pry the door open.  The father gets the child and walks out of range of the camera.

First and foremost, we all SHOULD know that children do no belong in washing machines.  That kind of prank is one that should get attention from Child Protective Services.  In which, it did.  There is a hunt out for the child and his parents.  Although the child was fine, with minor bruises and smile darling smile to accompany him, they are still in pursuit of the family.  Check out the video below

The YouTube video has over 6-million hits and brings a lot of angry comments from citizens.  There is only but so much that the courts should do though.  Let’s be real here for a second, there are FAR worse things that parents are doing to their children than playing a prank and it turns bad.  The child was fine, so at most the parents should be fined and put on probation.  The situation is crazy, but the parents obviously care very  much for their kid.  This is shown immediately as they saw that the washer was on.

If the courts take away this kid permanently, they might be overreacting a  tad bit.  One YouTube subscriber, submitted by GirlyGirl1125 comments “this video is messed up. Where the hell is DYFS in all of this, I get them called on me for something stupid as my daughter falling off a skateboard, these ni**ers put their kid in a washing machine and everyone thinks its a big joke. This state is really fu**ed up because the Division of Youth and Family Services don’t know abuse or negligent from their asses.”

First, I can’t believe that any negative thing that happens is tied and related back to race.  I thought we were in 2012, HOWEVER, the woman might have a point.  If one kid falls off of the skateboard and the parent gets in trouble, then it is only right that the parent who puts their kid in an active washing machine should be in some kind of trouble as well, prank or not.  Either way, I still believe that the situation was not intentionally supposed to hurt the baby, the prank just went the wrong way.

If you disagree with anything said above, leave a comment discussing your side of the argument.