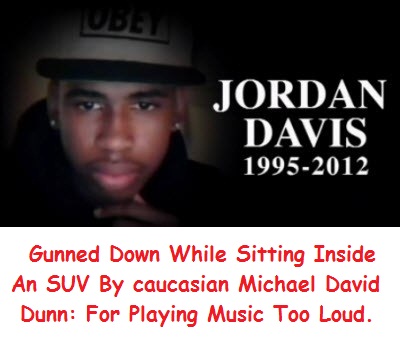 In honor of Black History Month, I figured it would be fitting to address an issue that has truly never been resolved and unfortunately may never find a solution; injustice. I think it’s safe to say that conditions have improved through the course of time for people of color and the bias and prejudice attitudes and actions they’ve endured; either that or the people responsible for them have gotten better at sweeping their issues under the rug. On the other hand, it’s also safe to say that those same attitudes are still present and endured through today. So I guess it would be more appropriate to say things have improved but have not been resolved.

The trial for George Zimmerman, the man responsible for killing the unarmed, black, 17  year-old Trayvon Martin, (in the name of self defense) has come and gone but now an all too similar trial is underway. Micheal Dunn, is currently awaiting a verdict after killing Jordan Davis, who was also 17, over a loud music dispute in 2012. An action carried out after Dunn, like Zimmerman, felt his life was being threatened and took fatal action.

Personally, I feel like both parties should be behind bars right now but I run a medical practice not the judicial system so my opinions are limited to my patients and prescription pad. The verdict for Dunn has yet to be issued but Zimmerman was acquitted of his crime. Not only that but his “get out of jail free” card was in my opinion, a slap in the face to those who’ve been victims of racial inequality. To me it felt as if jurors simply overlooked the victim and his family as if to say the crime wasn’t that bad, kinda like how people were OKAY with lynchings taking place in and around the South, justified or not. It’s hard not feel otherwise when Zimmerman has been made somewhat a celebrity by raising money for his case via the internet and even signing up to fight (legitimately) in a celebrity boxing match that was abruptly canceled last week.

The jury is still out on the Dunn trial but will his actions be overlooked as well? Neither Trayvon or Jordan are here to defend themselves so all we really have to go on are the people that took their lives, a pretty one sided argument if I have to say so myself. Is it too taboo to admit or bring to the public’s attention that maybe Zimmerman and Dunn have preconceived notions about many members of the Black community, especially males that may not provoke the best of actions towards them when challenged?

February is a time of national recognition and reflection for Black culture but they are not the only individuals who suffer from injustice. It’s an ongoing battle but there are alternative ways to combat against it, in the place of violence. Not wearing hoodies or pulling your pants up in public may dim the radar of public perception but those actions arn’t nearly enough to make a big turn around. Fight subtly, and unabrasively, not abruptly and irrational.

Use knowledge instead, to turn evil intent around for the good of those who are persecuted. If you’ve been a victim of racial profiling, study hard and become a civil rights attorney to help bring down those who prefer the attitude of separate but not equal. If it upsets you that people stereotype Blacks as being lazy and only want welfare, steadily work your way up the corporate ladder until you’re at the top of your game and own your own business. Yes, the injustice and inequality will still most likely be there but at least you won’t be fueling the fire by fitting the profile of who they believe you to be.