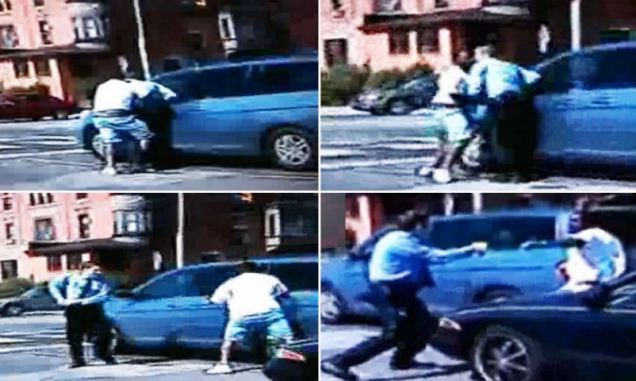 A police officer on duty in Philadelphia does his job by confronting a robbery suspect.  The two ended up in scuffle that was a “life or death” situation.   The male robbery suspect evidently did not want to surrender to the law.  As him and the officer went back and forth, the suspect grabs the officer’s baton and uses it as a weapon to beat the officer.  The male, later identified as Sydney Clayton, continues to pound on the officer’s head with the baton as the two split away from each other.  Clayton then reaches towards the ground to retrieve the baton and charge back at the officer.  The policeman had had enough of the beatings, so he draws his gun.  As Clayton approaches the officer for round 2 (or more like round 3), the officer opens fire!  The shots fired caused many bystanders to take for cover, even the individual who was video taping the incident.  After being shot the suspect lied down on the ground for a while before seen rising up and walking towards the back of the stationed car!  The suspect was sill not cooperating.  This forced other officers to come in and assist.   Clayton and the officer were both rushed to the hospital to be checked out for their injuries.  As usual, the police officers say that they believe that t”he man was high on drugs at the time of the attack.”  Check out the bystander’s video towards the end of the post.

Some things desperately need to be addressed in reference to this event.  1) The initial aggression 2) What Clayton was thinking? and finally 3) The stereotypical ending

First, this whole incident could have  easily been avoided.  I’m not sure who initiated the scuffle, but of course if it was not the suspect it wouldn’t be said anyway.  However, the whole police report refers to Sydney Clayton as “the robbery suspect.”  This means that the officer (most likely) didn’t have any evidence on Clayton, so why not treat his as a suspect and not like he was already found guilty!  I assume that Clayton fit the description of the alleged robber and the officer approached him and since he was supposedly “souped up on drugs,” things did not go as planned.  But maybe if Clayton wasn’t approached as if the officer just KNEW that he had robbed the place, things could have went a lot smoother.  Hmmm…

Secondly, Clayton had to be feeling like the Hulk because that man was determined! LOL.  He played tug-of-war with the officer, beat him with his own baton, took a couple shots, and still managed to get up and walk.  Now, that is remarkable.  But, in spite, of how the story went, Clayton knew better than that.  It was a little bit far gone.  I could only imagine that Clayton would react that way only if he felt threatened.  I see this, and I immediately one, if not both, of the parties have an anger issue.

Finally, Clayton had already been shot several times!  Why did it take more than two officers to restrain him?  Even though, Clayton had showed that he was not going down easily, it does not take three or four officers tugging at him from all directions.  I feel like that is borderline police brutality.  These type endings are so common (and stereotypical) for the police force.  No wonder many people refer to the police as “the biggest gang in America.”

Make sure you leave a comment below on your take of this event.